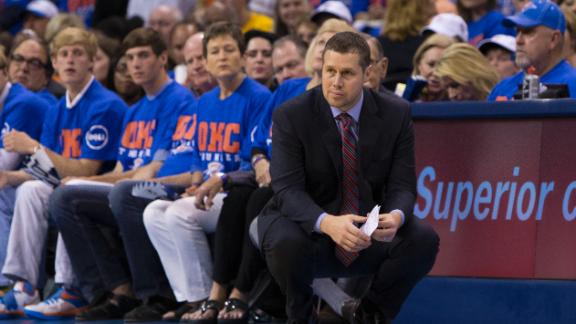 The Minnesota Timberwolves have gained permission from the Memphis Grizzlies to speak with Dave Joerger about their coaching vacancy, a source confirmed to ESPN.com's Ramona Shelburne.

Joerger's visit with the Wolves will take place Thursday, the source said.

Joerger, who is from Staples, Minnesota, and went to college at Division-II Minnesota State, Moorhead, has strong ties to Wolves president Flip Saunders. He led the Grizzlies to a 50-win season in his coaching debut. But he is said to want out of Memphis because of upheaval in the team's front office. On Monday, the Grizzlies announced that team CEO Jason Levien and assistant general manager Stu Lash had been dismissed.

Sources close to the situation told ESPN that a breakdown in the relationship between team owner Robert Pera and Levien (who helped broker Pera's purchase of the franchise in June 2012) led to a major shake-up in Memphis for the second successive spring. The Grizzlies declined to re-sign popular coach Lionel Hollins after last season's trip to the Western Conference finals, instead replacing him with Joerger.

On Monday, sources told ESPN.com that Pera expressed internal dismay with Joerger early in the season and contemplated firing him before the Grizzlies steadied themselves after Marc Gasol returned from injury. Memphis finished seventh in the Western Conference, however, and lost a seven-game series to Oklahoma City in the first round of the playoffs after star forward Zach Randolph was suspended for the deciding game.

A source told Shelburne that Memphis did not discuss possible compensation with Minnesota before granting it permission to interview Joerger. But the Grizzlies are expected to ask for it if Joeger indeed becomes the Wolves' choice, which could become a potential stumbling block.

"The Timberwolves are the only NBA team of the 30 in the league that are in his home state and after having a long and honest conversation with Dave, he felt he owed it to his family, which resides entirely in Minnesota ... and we felt we owed it to Dave to at least have a discussion in this regard," Grizzlies GM Chris Wallace told ESPN 92.9 FM in Memphis.

Asked if that was best for the Grizzlies, Wallace said he didn't see anything wrong with granting Joerger the chance to talk.

"He's just been granted permission to talk and will do so soon," said Wallace, who has assumed interim watch over the basketball operations while Pera restructures the front office.

The Wolves were 40-42 in Rick Adelman's third season with the team. They missed the playoffs for the 10th consecutive season, and Adelman retired in April after 23 seasons as a coach to spend more time with his wife, who has been in failing health.

Whomever Saunders hires will have to help him persuade Kevin Love to stay in Minnesota for the long haul. The All-Star power forward can opt out of his contract after next season, and sources have told ESPN.com he has told the team he will not sign an extension before his contract expires.

ESPN.com's Marc Stein and The Associated Press contributed to this report.