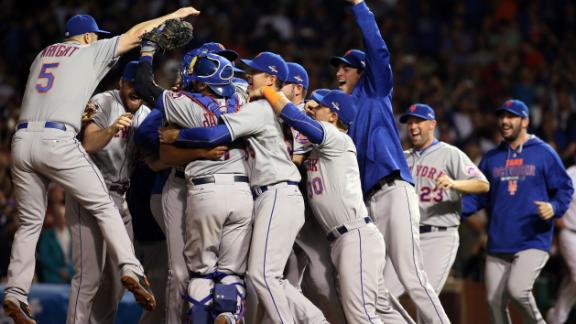 CHICAGO -- New York Mets outfielder Yoenis Cespedes pledged to be ready for the World Series, even if he needs to chop off his left arm.

Cespedes departed Wednesday's 8-3 pennant-clinching win against the Chicago Cubs in the middle of the second inning with shoulder soreness. Manager Terry Collins said Cespedes received a cortisone shot and should be fine by Friday's team workout at Citi Field.

The World Series opens Tuesday at Kansas City or Toronto.

"I'll be ready by Sunday," Cespedes said through an interpreter. "If not, I'll chop it off and put a new one on."

Cespedes said the shoulder had not bothered him until Wednesday's game began. He could not pinpoint precisely when he injured it.

"I don't really know," he said. "I just know that after the first at-bat, when I went back to the dugout, it just started bothering me. That's when I felt it."

Cespedes had walked and struck out in two plate appearances before departing Game 4 of the National League Championship Series.

Cespedes was spotted golfing on Wednesday morning at suburban Medinah Country Club, the course that hosted the Ryder Cup in 2012.

He confirmed he played but insisted the golfing played no role in the injury.

"It didn't affect me at all," Cespedes said. "It's been part of my routine. I've played all year long, and I played all last year. It actually helps me with my swing."

A source told ESPN's Buster Olney that Cespedes irritated the AC joint of his shoulder while doing pushups and that the Mets don't believe golf had anything to do with the injury, because Cespedes often golfs before games.

Juan Lagares replaced Cespedes in center field and was hitless in two at-bats.

Cespedes is hitting .265 (9-for-34) with two homers and seven RBIs this postseason.

He was acquired from the Detroit Tigers at the July 31 non-waiver trade deadline after the Mets' deal with the Milwaukee Brewers for Carlos Gomez fell through two days earlier. Now, Cespedes and the Mets are headed to the World Series.

"This is incredible," Cespedes said. "This has been the greatest moment of my career. I really don't have words to explain what I'm feeling right now."

ESPN's Buster Olney and Jon Greenberg contributed to this report.