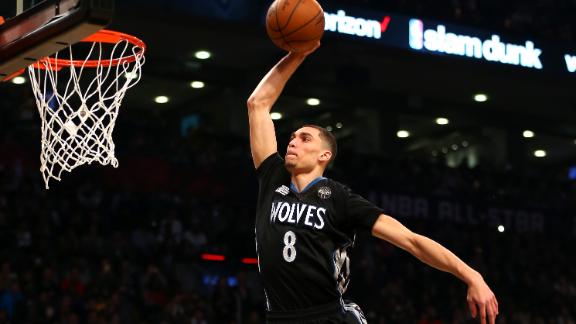 ESPN
TORONTO -- Zach LaVine was fresh out of dunks, having been pushed to the limit by Aaron Gordon in an epic final round in the NBA's slam dunk contest on Saturday night.

In need of some magic, he reached deep down into his repertoire and found just enough left for one more go.

"We were looking in our bag of tricks. Ain't nothing left," LaVine said. "I just found a little piece of dust."

LaVine pulled off a between-the-legs dunk from the free throw line on the second tiebreaker to take home his second straight dunk contest trophy, becoming just the fourth player -- afterMichael Jordan, Jason Richardson and Nate Robinson-- to pull off that feat.

The Minnesota Timberwolves guard had never tried the dunk before. Not in practice. Not at the playgrounds back home in Seattle. But he had already used all four of the dunks he planned to do when fellow contestant Will Barton told him to try it.

He pulled it off, putting an emphatic punctuation on a contest that instantly drew comparisons to the showdown between Michael Jordan and Dominique Wilkins in 1988.

"I just think that was the best contest," LaVine said. "There was some stuff that's never been done before. I don't want to get into the greats -- Mike, they're in a different breath. If you really look at it as a whole, we were doing dunks that professional dunkers take four or five tries to do and we were doing it on the first try. It was ridiculous, man."

Lavine dedicated his win to his late coach Flip Saunders, who died ofHodgkin's lymphoma in October.

The night started as a coronation when, on his first dunk, LaVine grabbed the ball off the bounce, wrapped the ball around his back before cupping it with his right hand and throwing it down. But once the contest was whittled to two contestants, Gordon put on a show and was every bit LaVine's equal.

"I'm so happy I prepared some extras because usually you don't need them," LaVine said. "People usually aren't that prepared to go up against you. But he deserved the title just as much as I did. He ... did some crazy, ridiculous dunks. I'm just glad I got the last laugh."

Gordon jumped over Magic mascot Stuff, who was standing on a hoverboard, for three of his dunks, including one in which he grabbed the ball and passed it underneath both legs before throwing it down. He also grabbed the ball out of a spinning Stuff's hand and threw down a huge 360 to open the final round.

The door finally opened for LaVine when Gordon was awarded a 47 on his fourth dunk of the second round, a Harold Miner-style jackknife.

Then LaVine shut it down, scoring a 50 on his final dunk.

"Zach's an incredible dunker," Gordon said. "He went through the legs from the free-throw line. That is insane. So off that dunk, you've got to give it to him. That's why the trophy's with him and not with me."