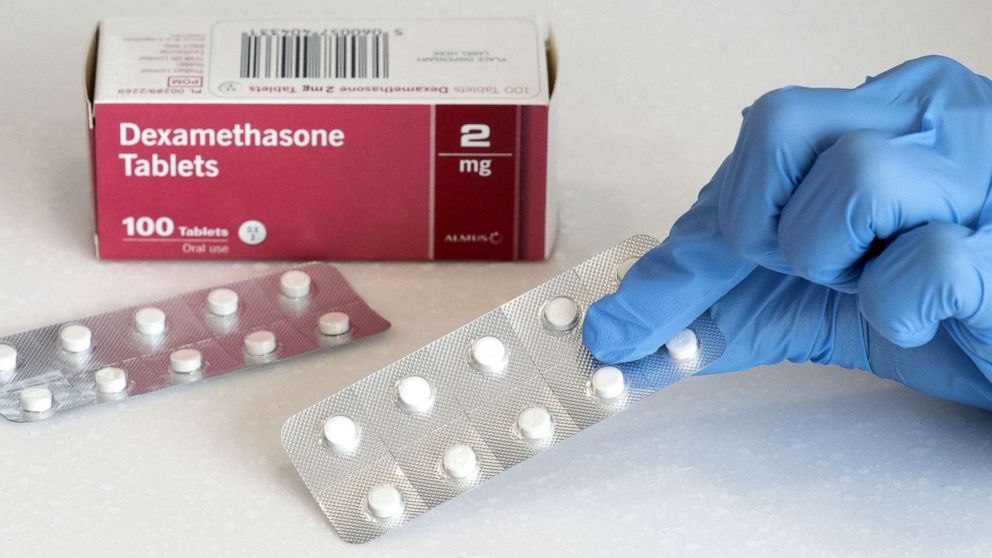 As the world awaits a COVID-19 vaccine, researchers studying possible treatments have found a commonly used steroid called dexamethasone might help save one-third of patients who end up on ventilators.

While another drug, remdesivir, has been shown to help people severely ill with COVID-19 recover more quickly, this is the first time any drug has been shown to significantly boost the survival rate of patients on ventilators.

"This is an exciting clinical trial -- it is the first study of this magnitude that has shown a significant decrease in mortality," said Dr. Todd Ellerin, chief of infection prevention at South Shore Health.

The study, conducted in the United Kingdom, included almost 6,500 patients from 175 hospitals. The results have not yet been vetted through the traditional peer review process.

Researchers found that patients on mechanical ventilators who were given a low dose of the steroid were more likely to recover than those who received standard care.

Meanwhile, the drug also seemed to benefit patients who required oxygen assistance without mechanical ventilation, reducing deaths in this group by about 20%.

The drug did not seem to help patients with milder COVID-19 symptoms who were able to breathe on their own.

Dexamethasone is a low-cost, widely available anti-inflammatory drug that has been around for almost 65 years. The drug worked so well that an independent monitoring board recommended that this part of the study end early so the public could see the results.

"This study appears to indicate that the fatalities associated with patients who need ventilations or oxygen therapy can be reduced, and probably the duration they spend in the ICU can be reduced," said Dr. William Schaffner, a professor of preventive medicine and infectious diseases at the Vanderbilt University Medical Center.

In the United States there are at least two clinical trials for dexamethasone registered at the University of Colorado Boulder and with a biotech company called AVM Biotechnology, but it does not appear that they have started testing yet.

Since this steroid has previously been approved by the FDA for other treatments, doctors can prescribe the medication "off label" for treatment of COVID-19.

Krakower said he had a severe case of COVID-19 that was not getting better.

"Scott came in the ER with multiple complaints, difficulty swallowing, difficulty breathing, and I noticed that he was breathing relatively rapidly. So because of that, I wanted to select a medication that had rapid onset that was quite potent," Glatter told ABC News.

Glatter recognized the potential dangers associated with upper airway or throat swelling, and since there are no approved treatments for COVID-19 yet, he chose the steroid dexamethasone.

"These steroids belong to a class of medications that have effects on cells -- and really it's the inflammation that the steroid affects and helps to reduce," said Glatter. "So, for example, when you have a virus, the steroid itself doesn't act on the virus -- but it's the effects of the virus. So the effects of the virus are usually inflammation, and it causes swelling of cells and produces byproducts that are adverse in terms of recovery."

Among steroids, dexamethasone is also known "for its speed of action, greater potency compared to other steroids, as well as length and duration of clinical effects," Glatter said.

Krakower said the treatment was beneficial, with immediate and long-term effects.

"I remember it was the first time where I could actually breathe and talk without coughing," Krakower said. "After I received the IV steroids, I would say that there was an immediate effect. And then there was a long-term effect as well, where I noticed that I was more alert and also was able to stop coughing. I actually do think it was a turning point for me."

There has previously been ongoing debate on the use of steroids, as some studies have shown poor outcomes.

"COVID-19 has two parts, the virus and the inflammation," Ellerin said. "Steroids are anti-inflammatory and can reduce inflammation, or the immune response in the lungs, or even the vessels around the lungs and other organs, including the heart, kidneys and liver, which is common with the virus. However, steroids can potentially increase the amount of the virus."

This drug and similar steroids are being studied in forthcoming clinical trials in the United States.

"I am not saying dexamethasone is for everyone," Ellerin added, "but right now we need to strongly consider it for patients who are severely or critically ill from COVID-19."

Experts emphasized that people who are less sick may not benefit from dexamethasone, and implored the American public to adhere to preventative measures that include social distancing, mask wearing and hand hygiene.

"The study suggests that people in the latter, most severe stages will benefit, not patients from earlier stages," Schaffner added. "It won't prevent them from moving into serious sickness, but once you are there, the drug can be given and you can possibly reduce your chances for mortality."

What to know about the coronavirus: