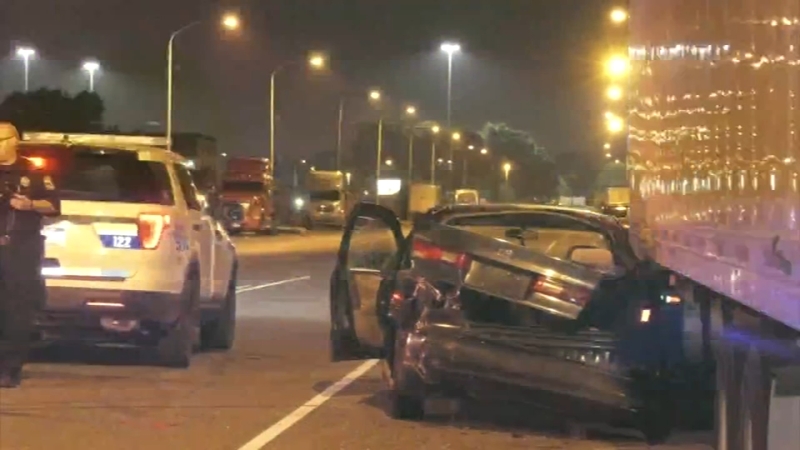 PHILADELPHIA (WPVI) -- Police are investigating a bizarre crash and robbery in South Philadelphia.

A car that lost control during a street race at 3rd and Pattison left one woman in the hospital and another with cuts and bruises after a group of people beat and robbed her as she took pictures of the driver who fled.

The woman, interviewed by Action News asked to stay anonymous because she fears for her safety.

She claims at 3 a.m. Saturday, she and a friend saw a group street racing and stopped to record it.

One vehicle lost control and hit the woman's car while her friend was standing on the roadway on the passenger side.

"The girl in her vehicle lost control of her vehicle spun out and smacked my vehicle in doing so smacking my vehicle my friend was on the passenger side standing there which caused her to get hit and thrown into the tractor-trailer," the woman told Action News.

The crash caused the tractor trailer's fuel to spill on the roadway triggering a response from hazmat.

People at the scene pulled the woman from underneath the tractor-trailer and transported her to the hospital.

The woman who spoke to Action News says she began to record the vehicle involved in the crash before the driver fled. She says she was then beaten and robbed of her cell phone.