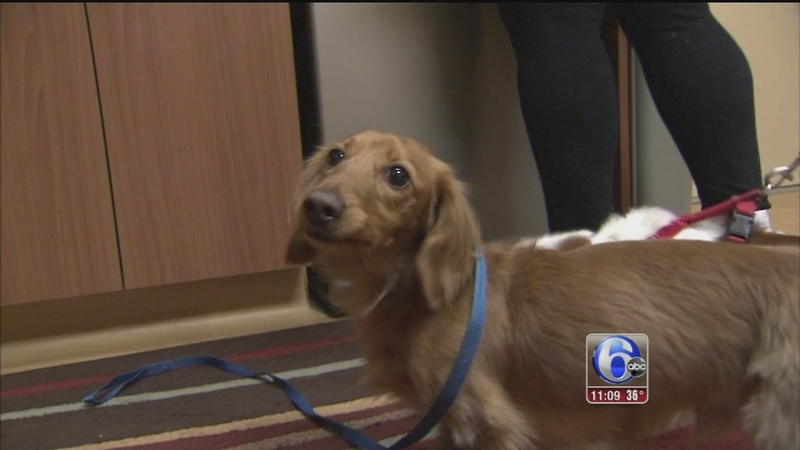 BENSALEM, Pa. (WPVI) -- Last month, a dog went missing after a bizarre incident in Bensalem, Bucks County - now the pup has been happily reunited with his owners.

"Ecstatic - I cried multiple times as soon as I saw him in the cage," said Nicole Donlen, owner.

It's been two weeks since Ollie the Bensalem canine chased after an intruder who broke into his owners' Bobolink Drive home in the Franklin Commons Apartment complex.

Donlen says Medero came crashing in through a window and that's when Ollie and fellow dachshund Heinz attacked.

"He knew someone was in the house and that's what dogs do. They protect and he protected me and got me out of the house in enough time," said Donlen.

Police say Medero fell from the second floor with Ollie and that the man eventually broke into the home of a neighbor who shot him twice.

During the bizarre and violent turn of events, Ollie was lost in the chaos.

There were sightings so a rescue and recovery group called Ruby the Greyhound set traps.

Dachshund Rescue of Bucks County and New Jersey also provided the infrared camera that helped his owners track him down Sunday afternoon, more than a mile away from home.

"Around 2:00 a.m. we got infrared photos of a little dachshund so we were like, 'We know it's him,' we know he's there," said Greathouse.

Action News caught up with Ollie at NorthStar Vets in Robbinsville, New Jersey where he was back with his buddy Heinz being checked out for an injury to his back leg.

"He's happy, he looks good so really, really hoping that he can come back and go back to a normal life," said Greathouse.

Ollie will have to undergo surgery but he's expected to make a full recovery.

A Go Fund Me account was set up to help pay for his expenses and the rest will be donated to the animal rescue and recovery groups.