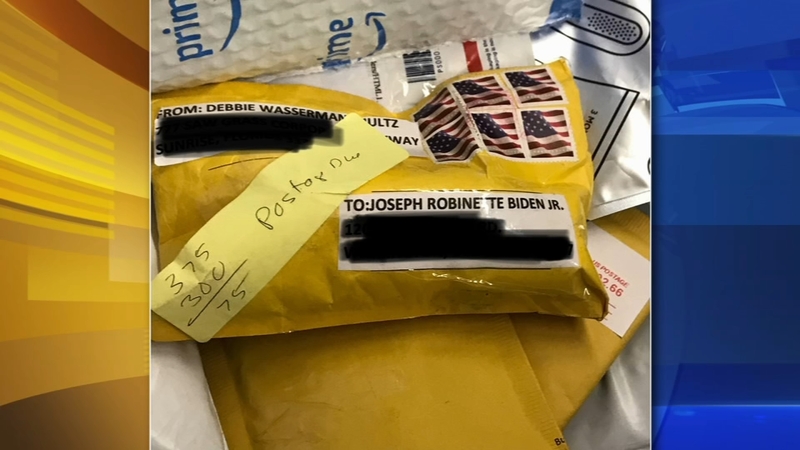 Action News has obtained a photo of one of the packages. The return address is the same as others that were sent around the country.

PHOTO: This is the pic of the suspected pipe bomb addressed to Joe Biden. The sender is the same as the others sent around the country. Supervisor who saw the package says the object inside seemed to be “shaped like a flashlight”. She immediately told employees to evacuate @6abc pic.twitter.com/ylXR4cQqIN

It all began around 6 a.m. when the New Castle facility, on the 100 block of Quigley Boulevard, was evacuated and all mail trucks were moved to other facilities.

County police told Action News the FBI took over the investigation at the post office.

Then, just before 8 a.m., police responded to the postal facility in the 1500 block of Lancaster Avenue in Wilmington.

A supervisor says she saw that an object inside seemed to be "shaped like a flashlight" and told employees to evacuate.

Chopper 6 was over a Wilmington mail facility where a suspicious package addressed to Joe Biden was found on October 25, 2018.

At least 10 suspicious packages were sent to prominent public figures this week.

Officials said all the packages were similar: manila envelopes with bubble-wrap interior bearing six stamps and the return address of Rep. Debbie Wasserman Schultz. She is the former chairwoman of the Democratic National Committee who was accused by Clinton rivals of secretly helping the party's eventual presidential nominee.

There was no indication Shultz was involved.

Authorities are calling these devices acts of terror, and they believe they are all connected.

President Trump said while condemning the sending of suspicious packages to the Clintons, Obamas, CNN and more