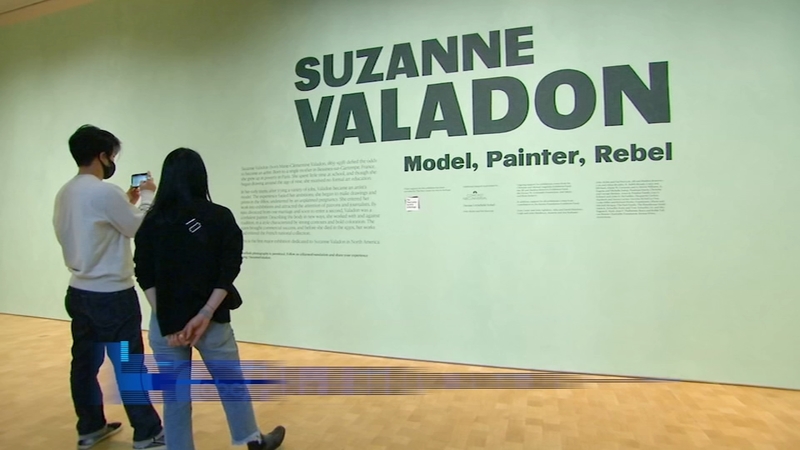 PHILADELPHIA (WPVI) -- The Barnes Foundation is showcasing the work of a trailblazing French artist who's historically been overlooked in the United States. Karen Rogers brings us this week's 6abc Loves the Arts.

"There's never been a major exhibition at a US art institution of Suzanne Valadon's art," says Nancy Ireson, the Deputy Director for Collections and Exhibitions at the Barnes Foundation.

She was born in 1865 in poverty and went on to model for some of the most famous French artists of her time, such as Renoir, Toulouse-Lautrec and Puvis de Chavannes.

She went from modeling to self-taught artist. And she redefined the way female artists portrayed the human body.

"She learned from actually being around artists," Ireson says. "Valadon painted the nude body often, she even painted herself nude."

One of her most famous works is called The Blue Room, showing a reclined woman wearing pants and smoking.

"It was made at a moment when women were so much more independent than they had been," Ireson says.

For Valadon, art was a way to make ends meet.


"She was an independent woman; She was a single mother herself. Valadon had a child, Maurice Utrillo, who becomes a famous artist in his own right," says Ireson.

She fell in love with one of her son's friends, a model who sat for her paintings. Her Adam and Eve portrait depicts her with her much younger lover.

"Which is still the thing that causes shock now," says Ireson.

Her nude portrait called Black Venus, both challenged and perpetuated racist ideologies.
Says Ireson, "For every question these pictures raise, we can search for an answer."

Valadon was celebrated in her lifetime in France but has never gotten her due in the United States.


"Some of that is because she was a woman artist, some of it was judgments around her lifestyle, that are still brought on women today," says Ireson.

Suzanne Valadon: Model, Painter, Rebel is on view at the Barnes until January 9.
--