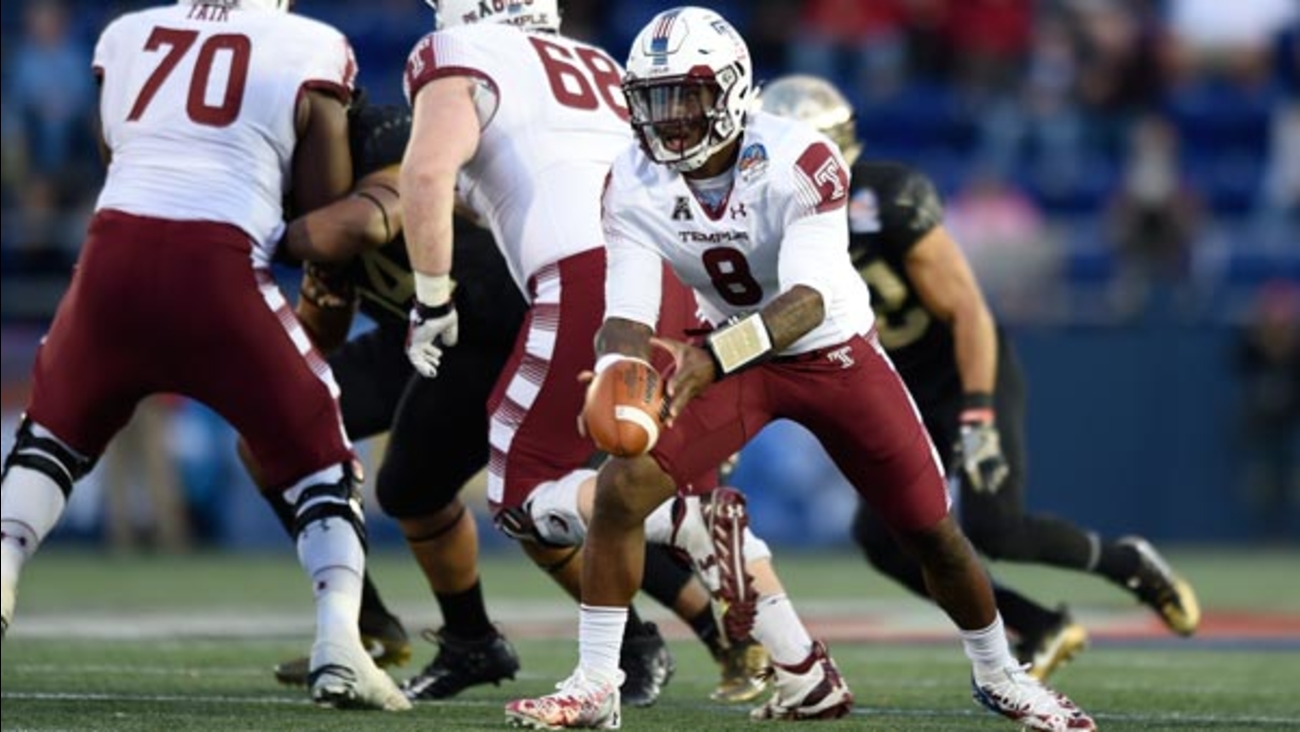 Temple quarterback Phillip Walker looks to hand off against Wake Forest during the first half of the Military Bowl NCAA college football game, Tuesday, Dec. 27, 2016 in Annapolis, (AP Photo/Gail Burton)

ANNAPOLIS, Md. -- Wake Forest attached a positive ending to a season marred by scandal, using a strong performance by quarterback John Wolford to beat heavily favored Temple 34-26 on Tuesday in the Military Bowl.

After throwing an interception on the first series of the game - a turnover Temple used to take a 7-0 lead - Wolford helped the Demon Deacons rattle off 31 straight points before halftime.

Wolford left with a neck strain in the third quarter with the score 31-17. Wake Forest (7-6) then withstood a comeback bid by Temple (10-4) to secure its first winning season since 2008.

The victory gave the Demon Deacons something to talk about this offseason beside the troubling spy story dubbed "Wakey Leaks."

An investigation by Wake Forest revealed that broadcaster Tommy Elrod leaked or attempted to leak game plan information to at least three opponents. Though Elrod has not released a public statement on the scandal, the school has since fired him.

In spite of the distraction, the Demon Deacons snapped a three-game losing streak and won for only the second time since Oct. 8.

Wolford, a junior, completed 10 of 19 passes for 183 yards and two scores. His backup, redshirt freshman Kyle Kearns, went 4 for 10 for 60 yards and an interception.

Seeking the first 11-win season in school history, Temple came in as an 11-point favorite. A 48-yard pass from Phillip Walker to Adonis Jennings on the Owls' first offensive play gave them their only lead.

Temple fans gather at Masters Bar and Restaurant in North Philadelphia to cheer on the Cherry and White:
EMBED More News Videos

Temple fans are rooting on the Owls at the Military Bowl.

Down 31-7 late in the first half, Temple used a 19-point run to close to 31-26 with 3:56 left. Wake Forest then used an 80-yard kickoff return by John Armstrong and the resulting field goal to make it an eight-point game with 1:59 left, and the Owls had no answer.

Temple came in with a seven-game winning streak after capturing the American Athletic Conference title with a 34-10 rout of Navy on this same field Dec. 3.

Walker finished his career by going 28 for 49 for 396 yards and two touchdowns, both to Jennings. He was sacked four times, including a pivotal 22-yarder on second down from the Wake Forest 6 preceding the Owls' final field goal.

Temple was led by interim coach Ed Foley, who took the reins after Matt Rhule was hired by Baylor on Dec. 6. The Owls subsequently signed Florida defensive coordinator Geoff Collins as their new head coach, and he got a first-hand look at his new team on Tuesday.

Temple: The Owls showed their stuff in the second half, but this performance against a team that went 3-5 in the Atlantic Coast Conference was not the way they want to remember this season.

Wake Forest: Impressive outing against a conference champion and first bowl win since 2008 was a perfect way to end an imperfect season.

Temple: The Owls' next game will be played under Collins. One of his top priorities will be finding a replacement for Walker, the school record-holder for career completions, touchdowns, yards and wins by a starting quarterback (29).