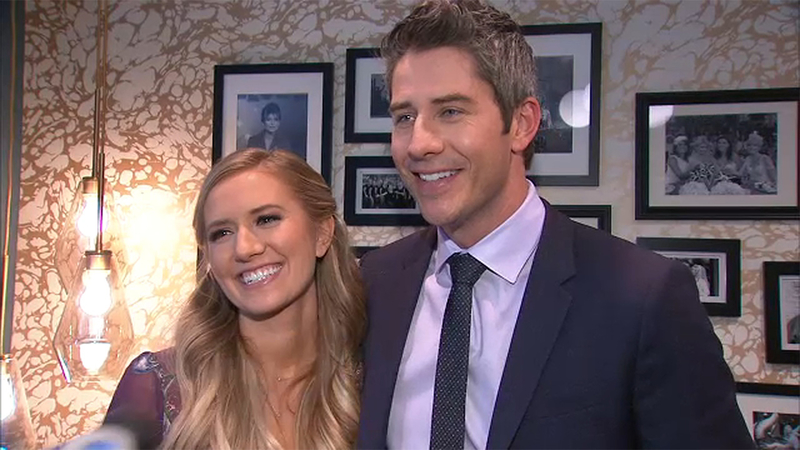 Arie and Lauren talk about their lives after 'The Bachelor'

NEW YORK -- "The Bachelor" Arie Luyendyk, Jr. and his fiancee Lauren Burnham say they are happy and so in love.

They gave a new interview following their appearance on 'Live with Kelly and Ryan' Wednesday morning.

The happy couple says they can't wait to get married and have a family. "We fantasize about our future and marriage and kids and we just want that, so we're just excited about it," Arie said.

If it seemed like Lauren didn't have any reservations about getting back together after Arie left her brokenhearted in the finale, think again.

"I was very excited, but then I took a step back and thought 'Wait a second,' I should probably ask him some more questions and make sure this isn't going to happen again," Lauren said. "That was my first thought, I didn't want to be put through that situation as well."

Arie says that it won't happen again and not only that, they want to get married sooner rather than later, both smiled as they talked about planning their wedding for sometime in 2018. As for it being televised like Jason and Molly Mesnick's wedding, Arie and Lauren said they are considering it.

"I think we're open to it," Arie said. "I think if it fits within our timeline, I know we want to get married soon, and so yeah, that's a possibility."

Neither has watched the finale yet or watched Arie's unedited breakup with Becca. However, they do plan to watch it at some point, they just didn't want to burst their bubble of happiness yet.

"Curiosity is going to get the best of me," Lauren said.

While Arie had given Becca an oval cut Neil Lane diamond ring, Lauren is sporting the cushion cut Neil Lane on her ring finger. She absolutely loves it!

It is a cushion cut center stone surrounded by a halo of diamonds and further encrusted with almost 170 smaller round brilliand diamonds and accented by two baguette diamonds. The platinum ring is set on all three sides and has a total weight of 3.65 carats!

Arie said that he wished that viewers got to see how funny and sweet Lauren is and added that although they did have "quiet times" they also had a lot of really fun moments too.

So what's next? Wedding planning and moving to Arizona immediately! Lauren will be flying back with Arie to Arizona Wednesday night to move in with and start their new life together.