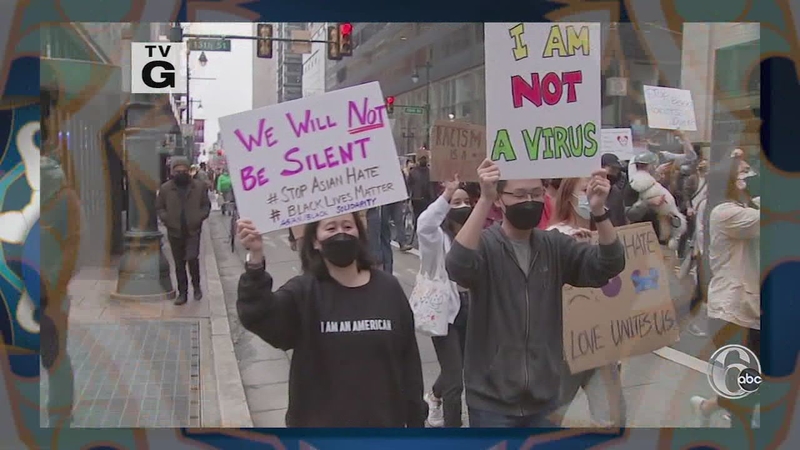 PHILADELPHIA (WPVI) -- To mark Asian Pacific American Heritage Month, it has a long and painful history. We take a closer look at the narrative of Asian Americans past, present and future. We explore the complicated relationship between black and Asian communities, teach our students about the history of Asians in America and learn how a new bill is adding AAPI history to the curriculum in Philadelphia schools. We can win seats in Congress and see how Asian American representation in politics could be moving in the right direction.

The election of Vice President Kamala Harris was groundbreaking in many ways. She is the first woman, the first black person and the first person of Asian descent to hold the office. Her election created an increase in Asian-American voters in 2020. Experts hope her election will increase the presence of the AAPI community in politics.

Andy Kim is New Jersey's first Asian-American Democrat to hold a spot in the U.S.House of Representatives. And David Oh is Philadelphia's first councilman of Korean descent. Despite these important seats representation in politics is still lagging behind for the AAPI community.
U.S. Representative Andy Kim | Facebook | Instagram

Rising discrimination against Asian Americans is not a new problem

The continuing backlash against Asian Americans amid the pandemic has produced reports of more than 6,600 anti-Asian hate incidents in one year. This current backlash is rooted in xenophobia, racism and stereotypes that date back nearly two centuries. While Asian Americans are a diverse group in every sense of the word, false narratives often obscure that truth with women objectified and fetishized as early as the 1800s and Asian Americans of both genders perceived both as a threat and the model minority.

There is a long history of both solidarity and strife between Asian Americans and the Black community, and it can be particularly challenging for those who are biracial. I am half African American and half Filipino so I sat down with Eugene Thomas, a man who is half Black and half Korean, to talk about the obstacles and opportunities that come with having one foot in each world.
Thomas is the President of Power Circle, a youth mentorship program he founded 7 years ago in the Frankford section of the city to, "just help y'all elevate in life," he explains to a group of 8th graders at Mastery Charter School Pickett Campus.

With gun violence surging in the city, he partnered with the school to provide programming, and on this day, he challenged the students to create a vision board for what their life could be.

"Every kid in the world just wants to feel accepted in life. So just to be able to give them opportunities and resources," Thomas says, "besides the negative things they see."

Growing up, Thomas says, he did not always feel accepted, "When I was young. I always was like ashamed to walk to the corner store with my mom or she had to take me to school or even to go to the mall to get on the SEPTA bus. I always like walked, speed up ahead or like, let her walk in front of me or always wanting my dad to be the one to take me to school."

His father is Black; his mother is Korean, "people used to always just look at me and come up to me, ask questions like, 'is this really your mom? Are you Chinese?'," Thomas says, "Being a kid, I just felt out of place."
It is something I can relate to. People used to ask me, 'Is that really your dad?,' which definitely made me feel really insecure.

Thomas says it made him question who he really was and, he says, made him want to get to know himself, "I felt like very different but at the same time like, I'm definitely unique."

With the past year-the pandemic, social unrest after the killing of George Floyd and then the sharp rise in violence against Asian Americans, Thomas says he worries about his 60-year old mother.

"You have to just be careful, like, even giving people like stares on accident because people get triggered off for no reason, off emotion, off of just the person, her being Asian, they can just attack her for no reason," he says he warns her, "And just make it home everyday. Make sure she calls me all the time."
But when Thomas went to a Stop Asian Hate Rally in Chinatown, in March, he was the one calling his mom, excited to share with her the swelling of community support he was seeing and the expressions of solidarity between the Black and Asian communities.
"We need to hold each other up and really start working together as humans," Thomas says, "Since I'm half Black/half Asian, I should have the ability to bring the Black people, meet them halfway with Asian people, which I do."

And he has great hope for the next generation.

"These kids are kind of like the glue to be able to merge these cultures together," Thomas says, "If the kids can do it, then adults can really catch on too."

My cousin was murdered because he was Asian

While mainstream America has only recently woken up to the history of anti Asian hate in this country, the problem is very real and personal to me. More than 2 decades ago, my 2nd cousin was murdered in California simply for being Asian.
Joseph Ileto, a letter carrier, was shot 9 times, twice in the front and seven in the back, on August 10, 1999.
The gunman, who investigators say had ties to hate groups, had just unleashed a flurry of bullets at a Jewish Community center, when he spotted Joseph, who is Filipino, on his mail route.

He was the Kuya, or in English "older brother," of Ismael Ileto. Ismael says every time he hears of a shooting or gun violence, it brings him back to that day in 1999, "but at the same time, it gives me a great hope that people are uniting and speaking up."

The National Federation of Filipino American Associations (NaFFAA) has just launched a new task force for Asian hate crimes that is intended to be both a data base for tracking incidents but also a landing spot for resources. It is open to all people, nationwide, both victims and witnesses.

Filipino American students at Temple University have also hit the front lines in the battle against hate, realizing they have the power to demand change.

"My parents grew up when protesting was bad," says Issalina Sagad, a junior at Temple active in community organizing, "the government punished anybody who went against them and their policies so there's that generational trauma that follows us, and it's up to us to break that."

The man who murdered my cousin, Joseph, is serving a double life sentence, and my cousin, Ismael, has become an outspoken activist, in the years since his brother's murder. Ismael says he hopes the growing chorus of young people will help wake the conscience of mainstream America to the invisibility that Asian Americans have felt for generations.