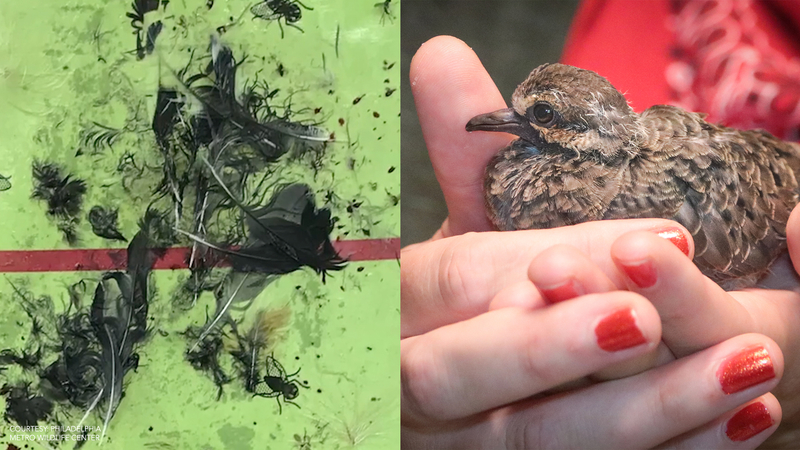 NORRISTOWN, Pa. -- The spotted lanternfly is no longer a stranger to our shores, but one method of targeting the invasive species has had a ripple effect on our native animals.

Scientists are recommending residents "squish" the bug, but sometimes, there's simply too many for one shoe to handle.

That's why tree banding has become a popular and cost-effective technique. Adhering a swath of sticky tape to the trunk can trap dozens of insects with little effort.

However, they're not only trapping the lanternfly.

"We get 5 to 10 animals per day caught on these trees," said Jackie Kent, the Director of Education at Philadelphia Metro Wildlife Center.

The rehabilitation center is accustomed to treating animals hit by cars, clawed by cats, or bruised by windows. But recently, they've seen an influx of critters suffering similar fates to the lanternflies.

"It's just devastating, especially for birds," said Kent. "No bird wants to be in here for two months while its feathers grow back. That's very stressful and some of them die from that as well, even if it's not from injuries from the sticky tape."

Backyard birds, squirrels, and bats are likely targets for the banded trees. Kent recommends that no person try removing the animal from the tape on their own. Instead, they should cut the segment of tape where the creature is stuck. If it is still living, it should be transported to a wildlife rehabilitation center where it can be tactfully removed and treated.

Philadelphia Metro Wildlife Center recommends the use of hardware cloth, a form-fitting galvanized metal mesh, to fine-tune the sticky tape's targets. Binding it to the trunk with cable wire, the gate-like shell can prevent larger creatures from falling victim to the tape.

While this layer of protection can surely save animal lives, it exposes a deeper flaw in the sticky tape technique.

"This is a very small-scale solution to the problem that's not helping things in the big picture," said Rick Schubert, Executive Director of Philadelphia Metro Wildlife Center. "What's going to keep their numbers down is not killing individual adults, but killing their egg masses that they lay in the fall."

Schubert says we will have to rely on native birds and insects to become predators of the invasive spotted lanternfly. He hopes, with time, that such critters will strike at the source by feeding on lanternfly eggs.

In order for that to happen, we will need native creatures to stick around rather than sticking to banded trees.

Anyone who discovers an animal in need of assistance should make a phone call to a wildlife center before taking serious action. Schubert says the best course of action is, in many cases, to leave the animal alone. The phone number for Philadelphia Metro Wildlife Center is (267) 416-9453.