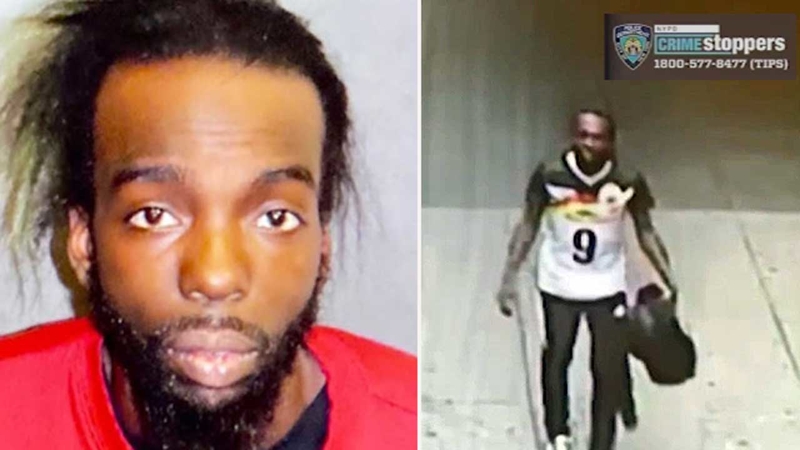 TIMES SQUARE, Manhattan -- The man wanted for opening fire in Times Square, wounding two women and a 4-year-old girl, has been arrested in Florida.

Authorities say he appeared to have been staying in Florida with a girlfriend.

The 31-year-old allegedly fired his weapon in Times Square this past Saturday while taking aim at his own brother.

He had been known to frequent Times Square, passing off bootleg CDs. He has been arrested several times over the last few years.

He was charged Oct. 17, 2018 with previously harassing a 25-year-old woman on the phone and sending her threatening text messages.

Between 2007 and 2015 he was arrested seven other times on various charges including robbery, grand larceny and fraud.

The mayor said he did not believe that shooting is indicative of larger problems.

There are additional police in the city's 20 largest subway stations in addition to those additional officers in and around Times Square.

But despite the NYPD's deployment of more highly-trained critical response command officers, Police Commissioner Dermot Shea says he is not convinced more cops would have stopped Saturday's shooting.

"Clearly deployment is a piece of this equation," he said. "But again, I spoke to one of the officers. He was literally feet away, a block away. He put it over (on the radio), responded immediately. You see how many cops were in that area."

Regarding the shooting victims, de Blasio announced Monday that all three are out of the hospital and "it looks like they will make a stronger recovery."

Alyssa Vogel was identified by police as the officer carrying the 4-year-old child to the ambulance after the shooting.

The 4-year-old underwent surgery and is now recovering at home.

Her grandmother expressed gratitude to Eyewitness News on Monday that the young girl was already out of the hospital.

A tourist shot when bullets rang out in Times Square[/url] on Saturday afternoon said she thought she'd never see her 2-year-old daughter again.

She said she thought she was going to die.

"I was able to run like five steps and I told my mom to take the baby and run," Magrinot said. "I saw a police officer and I screamed to him, 'I'm shot, I have a 2 year old, I don't want to die, please help me."

She also says she has no plans to return to New York City anytime soon.

Marcela Aldana, who was shopping with her daughter when she was shot, said her prognosis is good, but she has no idea when she can return to work to provide for her family.

Gov. Andrew Cuomo said the shooting was "more damaging" because it is higher profile.

"Times Square, high publicity, more people have heard about it," Cuomo said. "Times Square is a tourist destination. Times square is iconic New York City. Was it more damaging? Yes, only because it communicated to more people."

Cuomo added that real New Yorkers already "know there is a crime problem."

"Did it tell the people of NYC anything new," Cuomo asked. "No, no, that's why this is all a game. You take the subway, you know there is a crime problem. You live in NYC, you watch any newspaper, watch any news show for the past months, you know there is a crime problem. And now it happened in Times Square that may translate to more tourists, but i don't think it made a difference for New Yorkers."

New York has some of the most stringent gun laws in the country, but Police Commissioner Dermot Shea says more is needed.