About 13% of local high schools have significant gaps in female athlete participation.
WPVI
By TaRhonda Thomas and Maia Rosenfeld 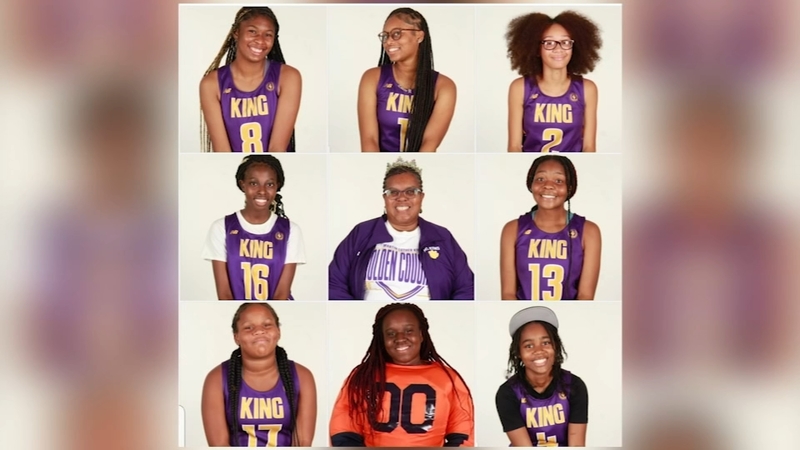 PHILADELPHIA (WPVI) -- For many high school students, sports provide a much-needed outlet, teach lifelong skills and open doors to future opportunities. Next week marks 50 years since Title IX helped level the playing field for female athletes nationwide, expanding their access to these benefits. But in many local high schools, girls -- and particularly girls of color -- still face barriers to equality.

Disparities in sports participation translate to gaps in academic achievement and success: "Student athletes, on average, will have a higher GPA rate, a higher graduation rate, higher attendance rate," said Dr. Jimmy Lynch, Executive Director of Athletics for the School District of Philadelphia.

Significant gaps in female sports participation are more common among schools serving majority-nonwhite students: A quarter of these schools in the tri-state metro have gaps larger than 10 percentage points. But one Philadelphia school with a 94% Black student body has managed to reverse this inequity. At Martin Luther King High School in Germantown, girls make up 35.6% of students and 53% of athletes.

"Being a student athlete myself in high school, it's important that girls get the opportunity to play," said MLK High School Athletic Director Regina Johnson. "I want to make sure girls have that opportunity."

High school sports help youth build confidence and self-awareness, Johnson said. They can also contribute to college acceptances and scholarships. These benefits are critical for students who may not otherwise have had or seen higher education as an option.

"I think it's a great opportunity," said MLK ninth grader Janee Flynn, who is on the school's basketball and track teams.

"When I was little, my dad always liked to watch ESPN, and I would sit there and be amazed," added her classmate and teammate Shania Louis. "When I actually got the chance to play sports, I felt happy."

At MLK, girls can choose from a wide array of sports, including field hockey, soccer and tennis. Still, access to these programs is not enough to achieve equal participation, Johnson noted. Many times, female students are hesitant to join a team.

"I just tell them I'm gonna teach them," she said. "I've had girls who have never played field hockey before and I say 'Don't worry about it, we'll teach you.'"

Even if they want to play, female students often face more barriers to participation than their male classmates.

"A lot of girls are reluctant to come out because they have family obligations," Johnson said. "My male athletes don't have the same responsibility." In one student family, she recalled, the brother played football but the sister couldn't come to sports practice because she had to take care of their younger siblings. "I see that a lot," Johnson added.

A combination of fewer opportunities and greater outside obligations limits girls' participation in sports, said Lynch.

At Philadelphia's High School for Creative and Performing Arts (CAPA), girls make up nearly three-quarters of the student body but less than half of athletes. At Camden High School, almost half of students are girls, compared to just one in five athletes.

Schools with unequal representation in their athletic programs can still be in compliance with Title IX if they demonstrate that they're accommodating all the interests and abilities or expanding the opportunities of the underrepresented sex, said Lisa Kaplowitz, Assistant Professor and Co-Founder of the Center for Women in Business at Rutgers Business School and former Title IX plaintiff.

According to Kaplowitz, large participation gaps are common. Across the country, most institutions violate Title IX protections, she said.

"These schools need to invest in women's sports," Kaplowitz added. "Practice time preferences need to be better, travel budgets need to be better, you pay the coaches better, and when you look at the collegiate level, scholarship money has to improve and become more equal." Representation and visibility of female athletes are also important for encouraging greater participation among young women, she said: "When you see a pathway, you can develop the pipeline."

The School District of Philadelphia is "very intentional" about how it spends its athletics funding and where it creates new sports programs, Lynch said. This Spring, the district started a girls flag football league in partnership with the Philadelphia Eagles.

Still, gaps persist across the district and around the country, leaving many high school girls without the advantages boys gain from sports. MLK High School offers inspiration for local students: Its girls basketball team was among the first in years from the newly restructured school to make it to state playoffs.

Flynn, Louis and 11th grader Rhianna Baxter were proud to make it that far playing a sport they love.