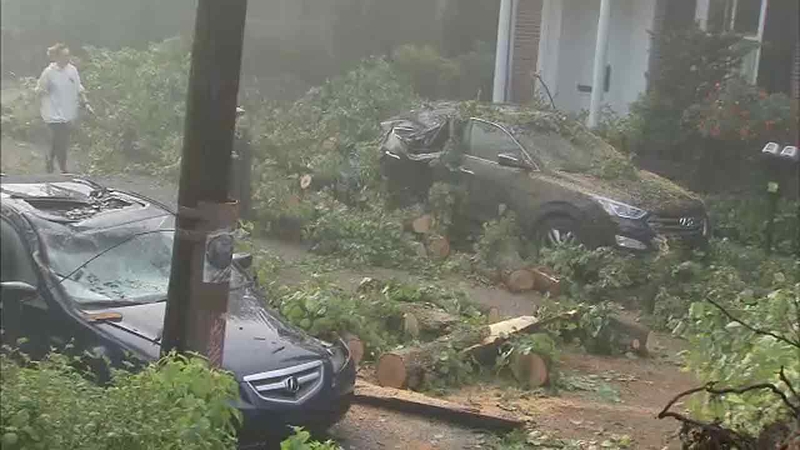 Residents across Delaware Valley clean up after Wednesday's storms

It was deja vu for residents in the Delaware Valley after another round of severe weather wreaked havoc on the region.

The National Weather Service said an EF0 tornado touched down near the border of Bucks and Lehigh Counties around 3:15 Wednesday.

The NWS said it will continue to survey the damage throughout the area Thursday.

Delaware Valley sees widespread damage as second round of storms rolls through region: Jeannette Reyes reports on Action News at 4 a.m., May 30, 2019

Residents in Lehigh County, Pennsylvania, were greeted to a massive hailstorm, some the size of ping pong balls.

Severe storms leave widespread damage across region. George Solis has more on Action News at 11 p.m. on May 29, 2019.

The winds ramped up by the early evening, bringing down trees and powerlines in other parts of the region.

"I felt like my house was shaking," said Stanley Schwarz.

"It sounded like movie sound effects for electricity and I saw this explosion where the tree was," said James Ehart.

In Upper Salford Township, Drone 6 showed the damage the storm left behind.

Drone 6: Storm damage in Upper Salford Township, Pennsylvania on May 30, 2019.

In Lower Frederick Township, Hendricks Road was blocked. Multiple trees were knocked down on Salford Station Road. And on Colonial Drive, wires also were pulled down.

Courtney Branham says a tree fell on her parents' home.

Severe weather brings down trees, power lines across region as reported by Annie McCormick during Action News at 11 on May 29, 2019.

The storm left thousands of people in the dark as crews worked to restore power late Wednesday.

Doylestown hit hard by severe storms as reported by Dann Cuellar during Action News at 11 on May 29, 2019.

A timelapse captures severe weather moving through the Philadelphia region on May 28, 2019.

The National Weather Service has confirmed that an EF2 tornado touched down in Morgantown, Berks County Tuesday night. An EF2 tornado ranges in speed from 111-135 mph, whereas an EF1's speed ranges from 86-110 mph.

There have been no reports of any injuries in both storms.

But rain may not be over. Future Tracker is showing another line of storms moving through the heart of our area around 6 p.m. Thursday.

ONE MORE ROUND
Future Tracker showing a line of storms moving through the heart of the area around 6pm on Thursday. This could be a 3rd straight day of severe weather. An Accuweather Alert remains in place. pic.twitter.com/MojudYUv1W