Bus driver ID'd in deadly I-380 crash in Poconos 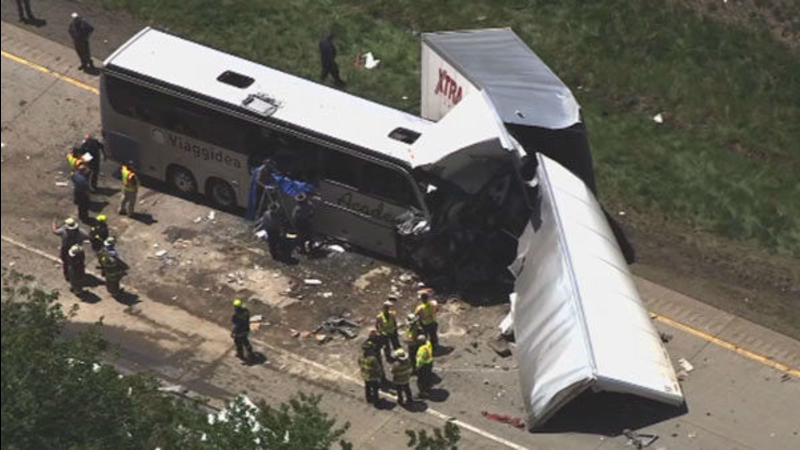 TOBYHANNA, Pa. (WPVI) -- Authorities have released the name of the bus driver who was killed in a crash on I-380 in Monroe County.

He is identified as 54-year-old Alfredo Telemaco of New York.

Telemaco along with two passengers on the bus died but several others were injured.

The update comes shortly after the roadway officially reopened in both directions on Wednesday night.

The crash happened just after 10:00 Wednesday morning on Interstate 380 northbound in Tobyhanna, near Mount Pocono.

Initial reports indicate that two tractor trailers traveling southbound collided, sending one of the trucks across the median and directly into the path of the bus in the northbound lanes. 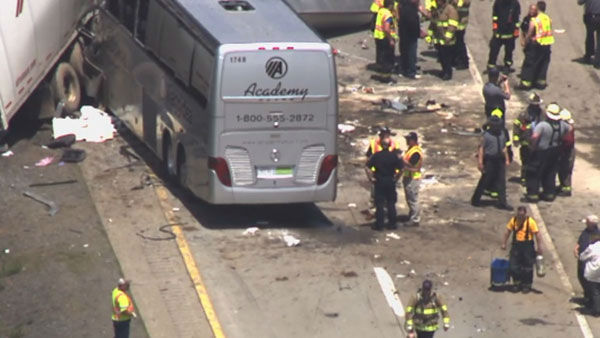 PHOTOS: Fatal crash in the Poconos
Chopper 6 was over the scene after a bus collided with two tractor trailers in Monroe County, Pa.

The cab of the tractor trailer landed in the woods on the side of the road.

The driver of the bus and two passengers were killed. Thirteen others were injured. Four of them were flown to nearby trauma centers, and authorities say two are in very critical condition.

The coroner said the bus was carrying Italian tourists.

The company went on to say: "We can confirm that one of the deceased is the bus driver. We offer our condolences to the family of this valued member of our Academy team, as well as to the families of others tragically affected by this accident. We also extend our thoughts to the injured."

The crash happened at the exact location where pop singer Gloria Estefan's tour bus was involved in a collision back in 1990, sending her to the hospital with severe back injuries.

Can of truck that rammed tour bus in Poconos killing 3 pic.twitter.com/Zi6ycvtOIx