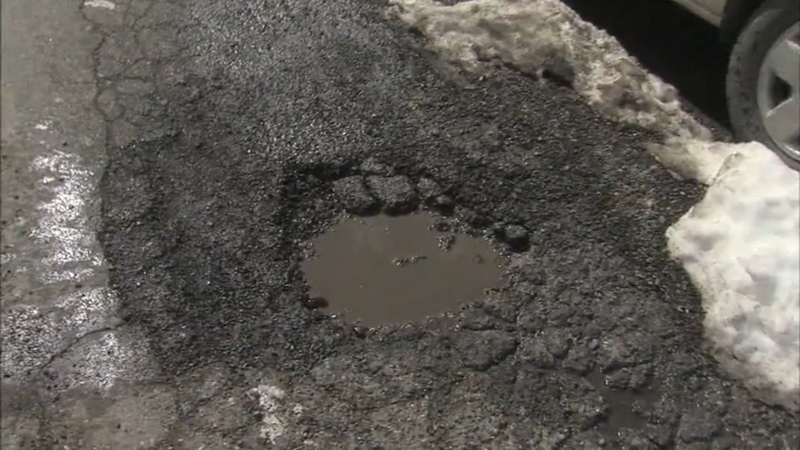 PHILADELPHIA (WPVI) -- The weather this year has been a recipe for potholes, and if it seems there are more potholes this year, you're right, there are.

The city says it expects to fill 44,000 potholes this year, a 20 percent increase over last year.

They jolt and jar drivers. Potholes! They are seemingly everywhere this time of year.

Kim Fabian of North Philadelphia says, "They are a mess, tearing our cars up, the whole neighborhood.

"People are scared to come down here. They don't want to come down this block because of all the potholes out here. They mess up your tires and stuff," added Karen Roberson of North Philadelphia.

Roberson lives along the 5800 block of Marvine. She is tired of potholes like this.

She's been complaining to the city and Friday they were out repairing the potholes on her block. But she wants more done.

Roberson says, "We need this block resurfaced, smoothed over like they do the rest of the blocks around here."

The city is listening. Mayor Jim Kenney committed $178 million to repave city roads over the next five years.

In year five, the city hopes to repave 131 miles. This year roughly 75 miles of road is expected to be repaved.

Dep. Streets Commissioner Richard Montanez said, "We will continue to increase our miles as we get more crews in. We have two crews in that will start the paving season, and our goal is to add a 3rd crew to get to that 131 miles.

Triple-A says 2018 is going to be a record year for potholes.