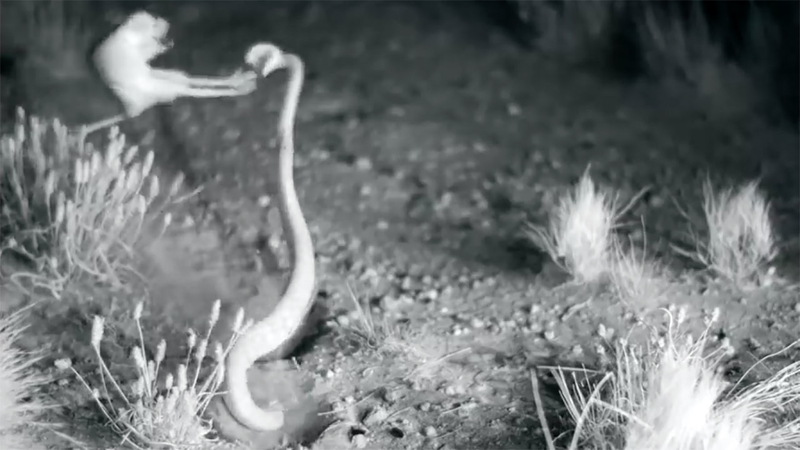 RIVERSIDE, Calif. -- When threatened by a hungry snake in the wild, desert kangaroo rats have powerful and spectacular moves like ninja-style kicks and jumps in their arsenal to protect themselves.

A team of researchers from three California universities used high-speed cameras to document the kangaroo rats' evasive maneuvers, finding that the rodents were able to jump 7-8 body lengths into the air to escape an oncoming snake, according to San Diego State University biology professor Rulon Clark.

"In perhaps the most surprising finding of our research, kangaroo rats that did not react quickly enough to avoid the strike had another trick up their sleeves: they often were able to avoid being envenomated by reorienting themselves in mid-air and using their massive haunches and feet to kick the snakes away, ninja-style," Clark explained in a news release.

One rat managed to kick a snake away with such force that the serpent landed on the ground several feet away while the rat escaped to safety. The rats are able to reorient themselves mid-air using their tails, according to San Diego State University doctoral student Malachi Whitford.

"These lightning-fast and powerful maneuvers, especially when executed in nature, tell us about the effective strategies for escaping high-performing predators," UC-Riverside associate professor Timothy Higham said in a news release. "Those that are successful at evading the strike will suggest ways in which the kangaroo rat might be evolving in response to the intricacies of the predatory movements."