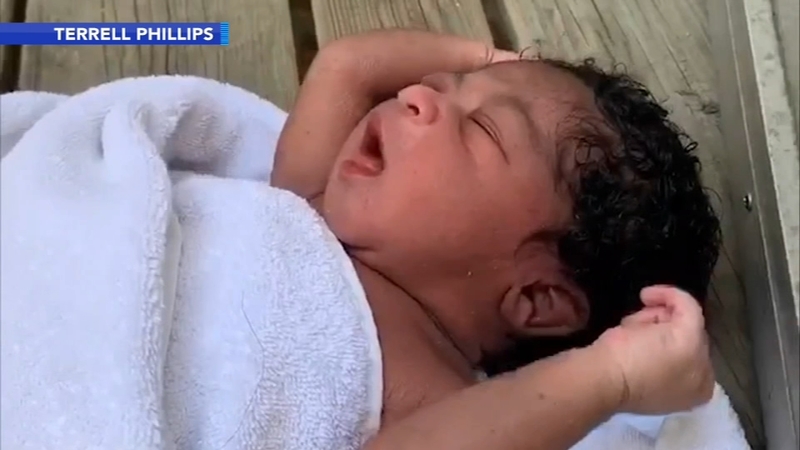 UPPER DARBY, Pennsylvania (WPVI) -- Police in Upper Darby, Pennsylvania are asking for the public's help after they say a newborn baby was found abandoned on Tuesday.

According to police, an hours-old newborn baby girl was left abandoned on the 100 block of Englewood Road.

"WE NEED HELP locating the parents to get them the assistance that they need. Mom, if you're reading this, call us," said police in a tweet.

WE NEED HELP locating the parents to get them the assistance that they need.

Mom, if you’re reading this, call us.

Terrell Phillips says the baby was found wrapped in a little white blanket on a porch.

Police in Upper Darby, Pennsylvania are asking for the public's help after they say a newborn baby was found abandoned on Tuesday.

"I picked it up and as I picked it up the towel was unraveling and I saw the baby still had the umbilical cord on it," said Phillips.

He called police. They arrived and took the baby girl to the hospital.

Police say she is doing fine.

The baby was left on the porch of Phillips' neighbor, Tom Dailey, who was just getting home from work.

"He said, 'Mr. Tom what is this?' And he says there's a baby here," recalled Dailey.

Tom says though his kids are grown he still remembers a thing or two.

A newborn baby was found abandoned on Tuesday as reported by Bob Brooks during Action News at 11 on July 30, 2019.

"As soon as she started crying I picked her up. It felt good," said Dailey.

Right now, Upper Darby Police Superintendent Michael Chitwood says they don't know who left the baby there or where she was born.

"If somebody wants to drop off a child to a hospital or police station, as long as it's not hurt and less than 28 days, you can do it without any criminality," said Chitwood.

"Probably 98-percent of the phone calls that we're getting are people who want to adopt the baby," Chitwood said.

The house where the baby was abandoned is less than a half mile not only from the police station, but from the fire department, as well.