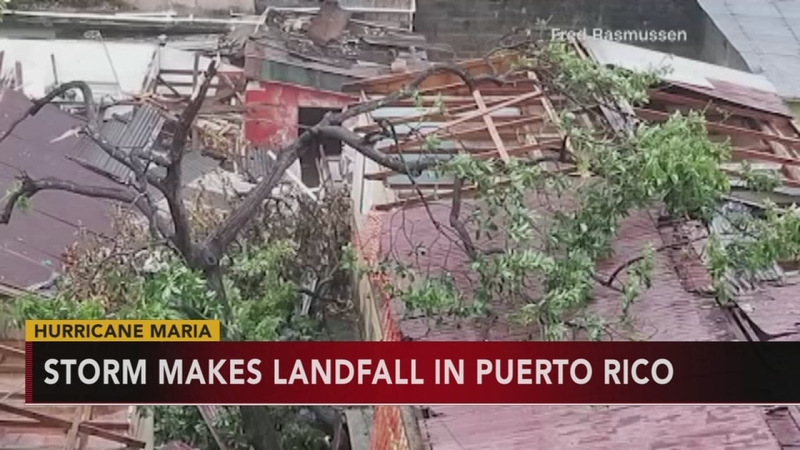 SAN JUAN, Puerto Rico -- One of the strongest hurricanes to ever hit Puerto Rico pummeled the island Wednesday, tearing off roofs and sending doors flying from hinges as officials warned Hurricane Maria would decimate the power company's crumbling infrastructure and force the government to rebuild dozens of communities.

Maria, which has killed at least nine in the Caribbean, made landfall early Wednesday in the southeast coastal town of Yabucoa as a Category 4 storm with winds of 155 mph (250 kph) winds, and it was expected to punish the island with life-threatening winds for 12 to 24 hours, forecasters said.
EMBED More News Videos

People calling local radio stations reported that doors were flying off hinges and a water tank flew away in the island's southern region. Meanwhile, widespread flooding was reported in the capital of San Juan, with water running down one apartment's interior staircase.

"This is going to be an extremely violent phenomenon," Gov. Ricardo Rossello said. "We have not experienced an event of this magnitude in our modern history." 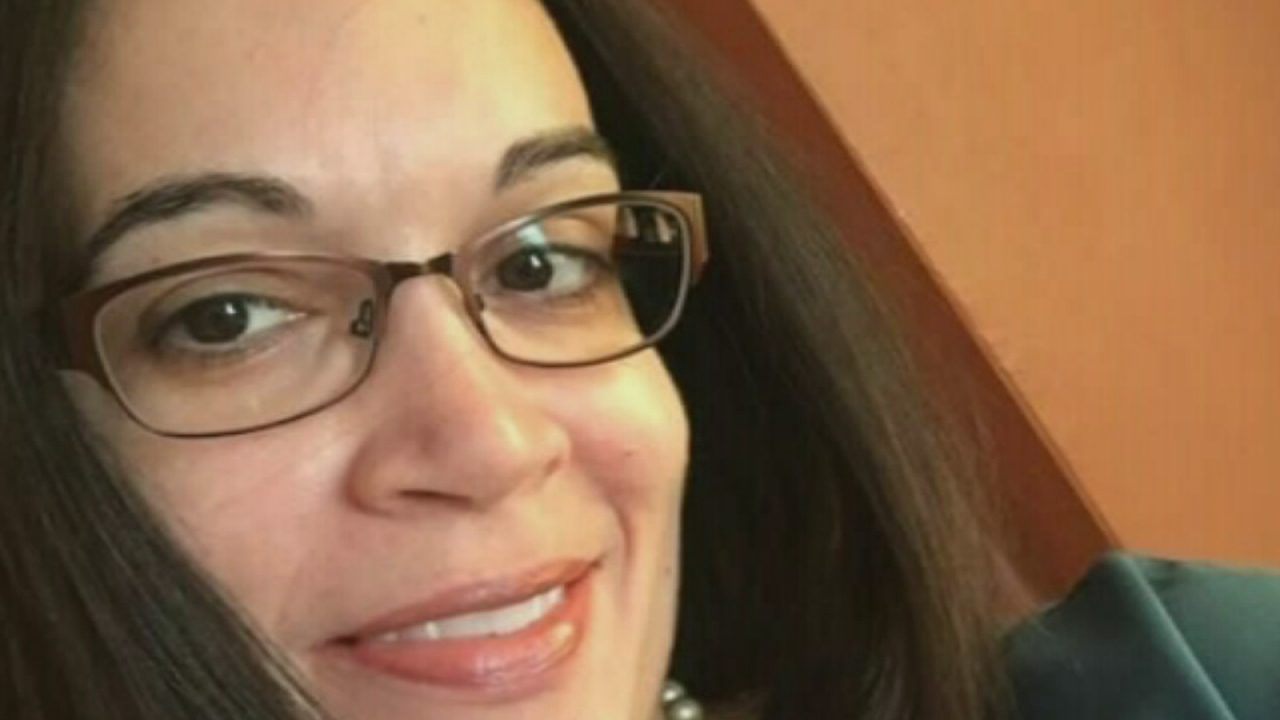 Mayfair resident trapped in Puerto Rico as Maria looms
Rebecca Ruiz and her husband took a trip to Puerto Rico to visit family and celebrate their wedding anniversary.
What they didn't anticipate was that Maria would strengthen to a category 5 storm, leaving them trapped on the island directly in its path.

Metal roofs were already flying and windows were breaking as the storm approached before dawn, with nearly 900,000 people without power and one tree falling on an ambulance. Those who sought shelter at a coliseum in San Juan were moved to the building's second and third floors, reported radio station WKAQ 580 AM. The storm was moving across Puerto Rico on Wednesday morning at 10 mph (17 kph), with a gust of 113 mph (182 kph) reported in the capital of San Juan, according to the U.S. National Hurricane Center in Miami.

Maria, which had previously been a Category 5 storm with 175 mph (281 kph) winds, hit Puerto Rico as the third strongest storm to make landfall in the United States based on a key measurement that meteorologists use: air pressure. The lower the central pressure a storm the stronger it is and Maria's pressure was 917 millibars, lower than Irma's U.S. landfall of 929 millibars in the Florida Keys earlier this month.

Puerto Rico had long been spared from a direct hit by hurricanes that tend to veer north or south of the island. The last Category 4 hurricane landfall in Puerto Rico occurred in 1932, and the strongest storm to ever hit the island was San Felipe in 1928 with winds of 160 mph.

As Maria approached, U.S. President Donald Trump offered his support via Twitter: "Puerto Rico being hit hard by new monster Hurricane. Be careful, our hearts are with you- will be there to help!"

More than 4,400 people were in shelters by late Tuesday, along with 105 pets, Rossello said.

"For folks in their homes, I really recommend that you not be in any kind of sleepwear," he said during a brief news conference. "Make sure you have your shoes on. Make sure you have a jacket around. Something for your head in case your roof should breach. ... I don't really recommend you be sleeping from 11 o'clock to 4 (a.m.). ... Be aware of what's going on around you." 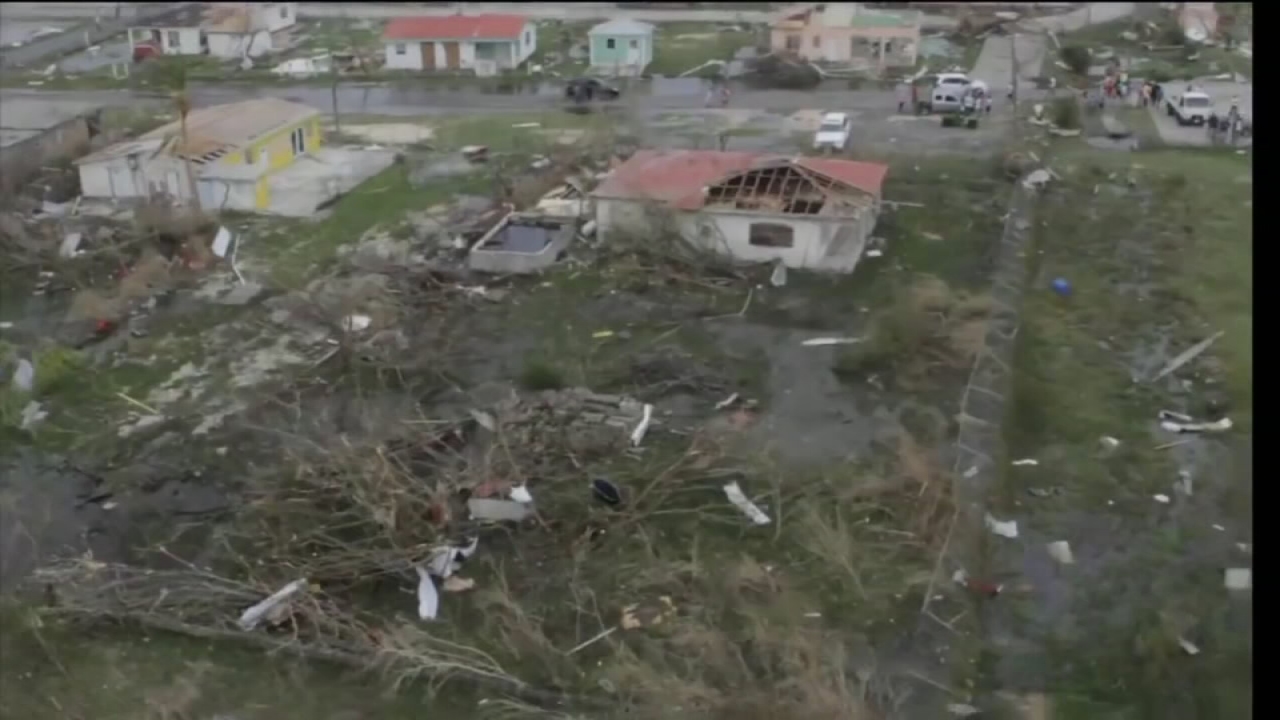 About 40 percent of the island - 80,000 homes - were without power and flooding was reported in several communities.

The storm also blew over the tiny eastern Caribbean island of Dominica late Monday, where Prime Minister Roosevelt Skerrit sent out a series of dramatic posts on his Facebook page, including that his own roof had blown away.

"The winds are merciless! We shall survive by the grace of God," Skerrit wrote before communications went down.

Watch raw video of Hurricane Maria as it makes landfall on the island of Dominica.