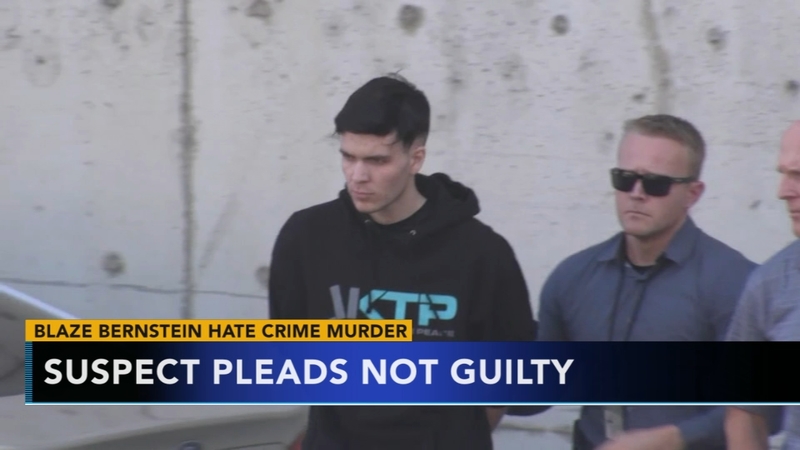 SANTA ANA, Calif. -- A Southern California man pleaded not guilty on Friday to the murder of a gay University of Pennsylvania student in a hate crime.

Samuel Woodward, a 21-year-old from Newport Beach, California, entered the plea during a hearing in Orange County Superior Court.

Bail was previously set at $5 million but Judge Kimberly Menninger ordered Woodward held without bail at prosecutors' request, saying she believed he would be a danger to the community if released.

Woodward is charged in the January stabbing death of 19-year-old college sophomore Blaze Bernstein, who was home visiting his family on winter break.

Bernstein, who was gay and Jewish, went missing after he went out with Woodward to a park in Lake Forest, California. His body was found days later buried at the park in a shallow grave.

According to authorities, Woodward picked up Bernstein from his parents' home and stabbed him nearly 20 times in the face and neck. DNA evidence links Woodward to the crime and his cellphone contained troves of anti-gay, anti-Semitic and hate group materials, prosecutors have said.

Authorities submitted as evidence in the case images of a knife, a bloodied sleeping bag and propaganda for Atomwaffen Division, a neo-Nazi group. The materials include swastikas and urge violence against gay people.

Defense attorney Robert Kohler, who argued for $1 million bail, said on Friday that there was no evidence that Woodward posed a threat to anyone, and he hadn't been able to make his previous bail anyway.

Bernstein was studying psychology and had been chosen to edit a campus culinary magazine. He and Woodward both attended the same high school in Orange County.

Woodward, who appeared in a shirt and jacket in a caged area of the courtroom, is due back in court Jan. 25. If convicted of first-degree murder and the hate crime allegation, he faces a maximum sentence of life in prison without parole.