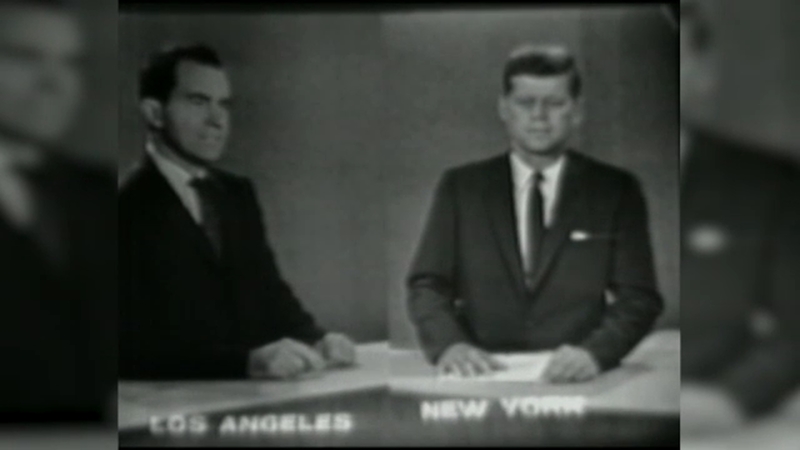 There's already been a 'virtual' debate - 60 years ago

This unprecedented year has inspired great innovation. But the idea of hosting a virtual debate isn't one of them.

Bringing people together remotely and televising it is not anything new, including in politics and presidential debates. On October 13, 1960, the third presidential debate between John F. Kennedy and Richard Nixon was hosted virtually. Kennedy was in New York, whereas Nixon was in Los Angeles, and the two were shown on a split screen. The debate's moderator, ABC News anchor Bill Shadel, was in Chicago along with a panel of four reporters.

That debate happened sixty years - nearly to the day - before the Commission on Presidential Debates announced on Thursday that the next presidential debate between President Donald Trump and Joe Biden will be held virtually in the wake of Trump's positive coronavirus diagnosis.

Shadel set the scene in his introduction to the historic debate, explaining that while the two nominees were 3,000 miles apart, they could still hear and see each other live.

"Now, like the last meeting, the subjects to be discussed will be suggested by questions from a panel of correspondents. Unlike the first two programs, however, the two candidates will not be sharing the same platform," Shadel said.

"In New York, the Democratic presidential nominee, Senator John F. Kennedy. Separated by 3,000 miles in a Los Angeles studio, the Republican presidential nominee, Vice President Richard M. Nixon, now joined for tonight's discussion by a network of electronic facilities which permits each candidate to see and hear the other," Shadel continued.

The "arrangement was necessitated by the candidates' campaign schedule, which put them on opposite coasts at this stage of the campaign," according to a New York Times article published on October 14, 1960.

And in 1967, Robert F. Kennedy and Ronald Reagan participated in a debate called "Town Meeting of the World." Moderator Charles Collingwood was in London with a group of students who asked questions. Reagan and Kennedy responded via satellite.

The pandemic has led virtual events to be the norm of 2020. Publishers' conferences, college graduations and funerals have been forced to go online due to social distancing guidelines.

But Trump said Thursday he will not participate in the second debate if it is held remotely. In an interview with Fox Business Network, Trump suggested a virtual debate would mean the moderator could "cut you off whenever they want."

Of course, moderators would follow the rules of the debate regardless of the format. The Biden campaign agreed to the virtual debate.

The precedent of hosting virtual debates was made sixty years ago. Kennedy did it. Nixon did it. Why not Trump?

As CNN's Brian Stelter wrote Thursday, "There are understandable reasons why Trump would want to opt out of a virtual debate. The format itself - with the two candidates in competing boxes on screen, socially distanced from one another - will be a reminder of his administration's failure to contain the coronavirus."

Debate analysis: After more than a year of circling each other, Republican President Donald Trump and Democratic challenger Joe Biden met on the debate stage Tuesday night in Ohio. Trump, Biden to host separate events instead of virtual debate

Can Americans prepay their taxes?