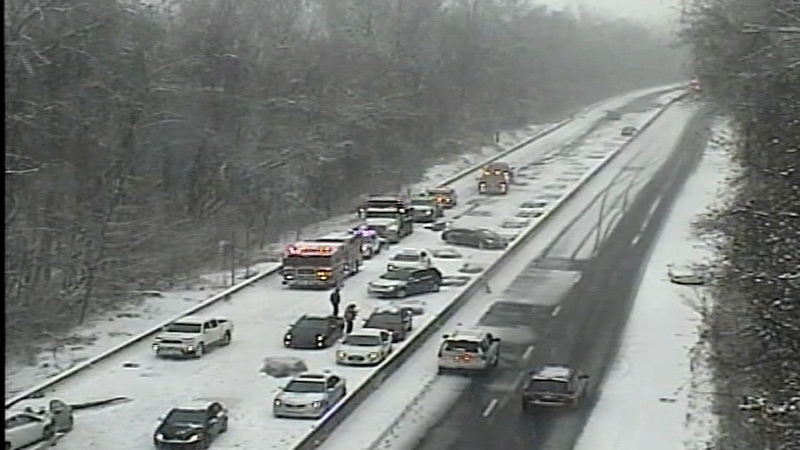 The slick conditions were a factor in many accidents Saturday morning, including a huge pileup on the Schuylkill Expressway in Montgomery County.

The snow was a pretty sight and easy to brush off the cars, but the roads were slippery.

Ryan Stella of Horsham said, "I'm getting coffee, normal day for me because it barely snow."

For most people, like Stella, Saturday morning's snowfall was hardly intimidating.

Most of the roads have already been plowed.

But it was enough to cause some slick conditions and major problems on the roads.

The weather was likely to blame for a crash this morning involving more than 15 cars.

It forced officials to shut down the Schuylkill Expressway for several hours in Montgomery County.

Over in West Conshohocken a tractor trailer driver is lucky to be alive after his truck flipped over this morning on the northbound lanes of the Blue Route.

The cab fell off the overpass.

Still for most it was slow but smooth sailing.

Rami Richie of Chester Springs said, "It kind of slows life down a little bit."

Bob Kent with PennDOT says the accidents and resulting closures slowed down plow truck drivers too. So they still have some work to do.

"The biggest mistake drivers make is that sometimes they get too close to plow trucks trying to do their work so we advise motorists to stay a good 6 car lengths behind our trucks," Kent said.

As long as drivers don't slow it down in these slick conditions, Lee says he'll be busy too.

"They get too confident too fast. They learn the hard way, and that's when they find me," he said.
------
Send a breaking news alert to Action News
Report a correction or typo
Want to comment?
Learn more about the 6abc apps
Related topics:
weatherpennsylvania newssnowhighways
Copyright © 2021 WPVI-TV. All Rights Reserved.
More Videos
From CNN Newsource affiliates
TOP STORIES