'It was a sinking feeling': Wedding ring lost and found at the Jersey Shore

A few tears were shed on the beach when the ring was back on Jim McAllister's finger.
WPVI
By Trish Hartman 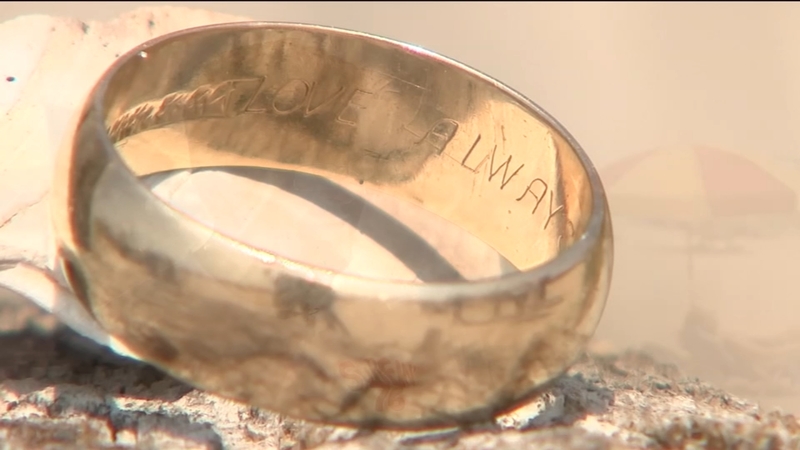 Wedding ring lost and found at the Jersey Shore

Hours later, thanks to suggestions on social media and a man with a passion for metal detecting, the ring was found.

Jim McAllister, 70, of Fox Chase, enjoyed some time in the ocean with his son Ryan when a big wave almost knocked him over.

"I felt the ring move," said McAllister. "And the water was clear enough that I saw it float away."

His wedding ring, which he has worn since 1974, was lost in the ocean.

"It was a sinking feeling because my wife passed away three years ago. Her name was Ellen, and we were married for 47 years," said McAllister.

Ryan McAllister said, "Just immediately memories of my mom just crushed me. I remember going over there and stomping my feet and sliding my feet around, trying, hoping that I can find this circle with my foot. And not finding it just made me feel broken."

"A couple of people said to contact John, the ring finder," said Ryan.

They met John Favano, known in Ocean City as "the ring finder" thanks to his metal detector and tenacity.

He started metal detecting as a hobby a few years ago.

Now he runs South Jersey Ring Finders, coming out to the beach whenever people lose their rings, keys, or other valuables.

The Ring Finders is a network of several hundred members who provide metal detecting services across the U.S.

"We go out at low tide," said Favano. "They'll point to where they were, and then I'll start a grid area of where they think they lost it out in the water."

He searched for about an hour and then decided to try another spot farther from where Jim said he was standing.

"And then I get another signal. And it's really deep. I dig it, bring it up, sift the sand out, shells are in there, and I see this big ring in there," said Favano.

A few tears were shed on the beach when the ring was back on Jim's finger.

"It's a great feeling to return something to somebody. It makes me happy that I'm helping someone," said Favano.

Jim says the next time he goes to the beach, the ring is staying home.

Favano asks for a small reward only if he finds the lost item.

He says it's best to try metal detecting as soon as possible after an item is lost, and remembering exactly where you were when you lost it gives you a much better chance of finding it.