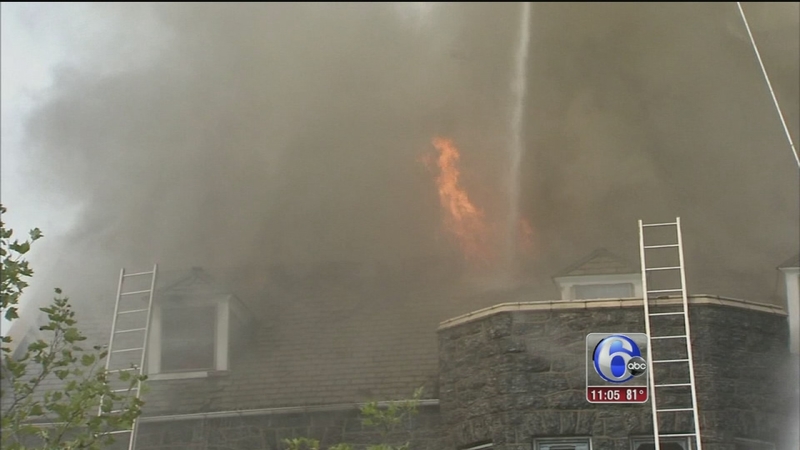 OVERBROOK (WPVI) -- A large fire ripped through a church in the Overbrook section of Philadelphia on Monday, heavily damaging a building that has stood for a century.

The fire was reported just before 9 a.m. at the Good Shepherd Presbyterian Church on the 6400 block of Lansdowne Avenue.

The blaze eventually went to four alarms, and it took hours for firefighters to get it under control.

Two people were inside when the fire started, with one person on the second floor and the other on the third floor.

Both were evacuated safely, and no injuries were reported.

"I was upstairs on the third floor, in the shower, and I came out and there was a lot of smoke," said church member Richard Klemm. "I just crawled down the hallway, came out the window, and they took me down the third floor.

Chopper 6 was over the church fire in West Philadelphia.

Firefighters say the flames were so intense they had to switch their focus from saving the church to protecting the buildings and homes around it.

Deputy Commissioner Robert Corrigan says said this blaze was one of the tougher ones to beat, with more than 120 personnel needed.

"Church fires are notoriously difficult to fight," he said. "They have a lot of void spaces and the fire can travel."

There was no immediate word as to how the fire started, but officials said they do believe it began in the basement.

Fire first reported at 9a along of 6400 block of Lansdowne ave. no injuries reported. pic.twitter.com/hJKyvUQ9pX

Lead pastor J.B. Adams III says multiple congregations use the space. However, he tells Action News they will find a place to worship this Sunday.

"Well we have 5 churches worshipping in our building, so I'm telling them all that we have to find another place to worship on Sunday," said Adams.

From this angle, looks like most of the church affected by fire. Damage is significant. @6abc pic.twitter.com/A85Jjd6tNb