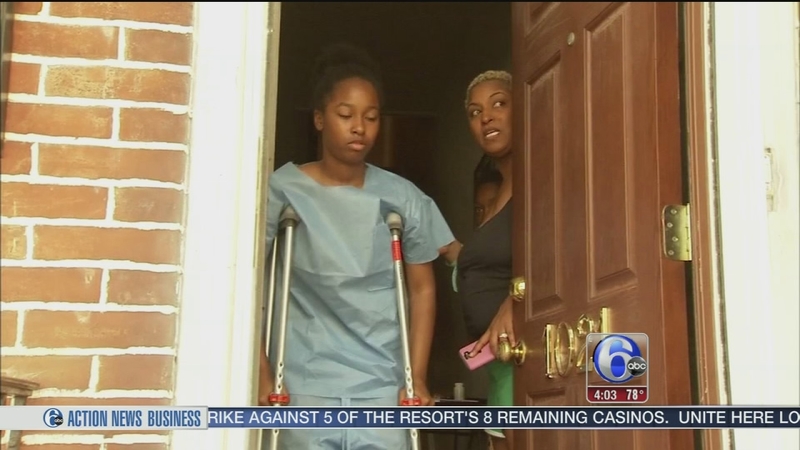 WILMINGTON (WPVI) -- Four young people - three teenagers and a 12 year old - are recovering after a shooting in Wilmington, Delaware.

The shooting occurred before 9:15 p.m. Tuesday.

A Wilmington police officer on routine patrol heard shots and called for back-up. He then found several victims scattered around the neighborhood.

Police determined four young people had been hit by gunfire. All were taken to area hospitals.

By Wednesday morning, 13-year-old Essence Hayman had been released, a bullet still lodged in her thigh.

She described when happened when the gunfire erupted.

"We started running," she told Action News. "Chris, he had dodged behind a car. And I looked back, and he was on the ground."

Five people were wounded during a shooting in Wilmington, Delaware.

Essence was hit in the thigh. Christian was shot in his right side and feet.

"I was trying to get home," said Hayman. "I was going to go back to get Chris but he told me to go on."

"I just saw blood," said Christian's grandmother, Darlene Van Riper. "He was in shock and trembling."

Van Riper knew he was outside and ran out when she heard shots. A bullet remains in Christian's side.

Police say the gunfire began shortly after 9 p.m. Initially they found a 16-year-old boy at Elm and South Van Buren shot in the legs and arm.

He was taken to the hospital with stable vital signs.

More 911 calls brought police up the block to Elm and South Harrison.

They found a 15-year-old with gun shots to his hand, stomach and leg. Medics rushed him to the hospital, where he remains in critical condition.

The shooting came just one day after another shooting the same neighborhood, which injured a 24-year-old man.

Police have not said whether the shootings might be connected, nor have they released information about a suspect in Tuesday night's violence.