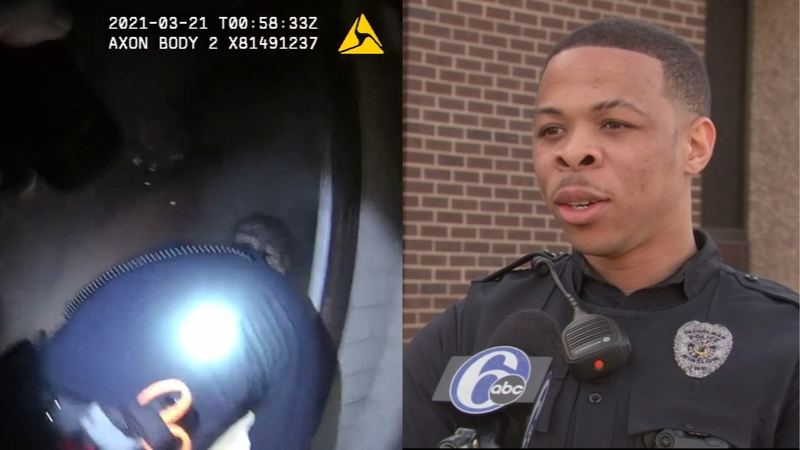 WINSLOW TWP., New Jersey (WPVI) -- A police officer in South Jersey is being hailed as a hero for pulling an elderly woman out of an apartment that caught fire over the weekend.

It happened around 9 p.m. on Saturday at the Edgewood Acres Apartment complex located on Church Road in Sicklerville.

Police say Officer Jarel Ferren, 28, observed flames coming from the rear sliding door of a ground-floor apartment and rushed into the residence after hearing someone calling for help.

"There was heavy black smoke coming out of the door. And as I was going up it sounded like an elderly woman quietly saying, 'Help,'" recalled Ferren in an interview with Action News on Sunday.

Multiple police officers in South Jersey are being hailed as heroes for pulling an elderly woman out of an apartment that caught fire over the weekend.

Body cam video shows Ferren rushing into the apartment to find the woman. He found the elderly woman lying on the floor. Video shows the officers pull the woman to safety.

"Luckily, she wasn't too far in where I could still reach her," said Ferren. "Thank God. We were able to get her out. And as of right now it sounds like she's doing OK."

The woman was later transported to an area hospital where she was treated for smoke inhalation and burn injuries. She is expected to make a full recovery.

Two Middle Township, New Jersey police officers are being hailed as heroes for saving a sleeping couple and their dog in a house fire last weekend.

Ferren has some extra qualifications that prepared him for this emergency.

"I've been a firefighter since 2013, so I'm able to maneuver around the room quicker than an everyday person would be able to do," he said.

He also has experience as an EMT and carries extra first aid equipment with him.

Ferren went to the hospital for smoke inhalation, but when he was released, he came back to work and finished the rest of his shift.

"I love this job. I love doing it. I don't want to miss a beat basically," he said.

The cause of the fire is under investigation, but police do not believe it's suspicious.

The victim's dog and parrot were also rescued.