Snow was no problem for Lehigh Valley residents, Philly braces for cold

"The walks are a little slippery, but no big deal. It's winter," remarked Gary Millar of Sellersville.
WPVI
By Corey Davis and Katherine Scott 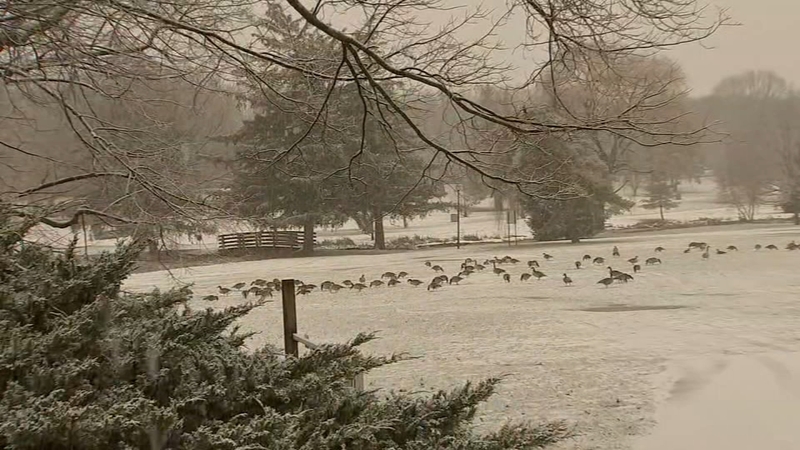 PHILADELPHIA (WPVI) -- In the scheme of snows, the storm that hit the Delaware and Lehigh valleys on Thursday was not a big one.

Snow in the Lehigh Valley

Snowflakes fell at Lehigh County Soldiers and Sailors Monument in Allentown, much of it melting as it hit the ground.

"I'm ready to move down south," stated Danielle from Allentown, who declined to provide her last name.

Terry Mack of Allentown laughed as he added, "It's just a spit. I grew up in the Poconos!"

"When I was a kid- this was nothing. They didn't send us home from school until there were six inches on the ground," Mack continued.

"I'm a CPA, so I'm really busy in the wintertime, so it can snow all it wants, and I'm just working," said Marty Levin of Weisenberg Township as he trudged into work.

The Action Cam was in South Whitehall Township when the rain transitioned into snow around 7 a.m. The surface was already wet from the overnight rainfall.

Some spots got slippery, but no drivers we spoke with encountered major problems.

"It was raining when I came up; the walks are a little slippery, but no big deal. It's winter," remarked Gary Millar of Sellersville.

"Roads are just wet. Folks are a little scared and drive a little slower than normal, but all is well," Levin said.

Crews were out salting and clearing, hitting lots, sidewalks, and streets.

The park was quiet.

The geese were nipping at the snow-covered grass: snowy, white, and still.

Corey Davis reports from Philadelphia on the wintry weather.

The sounds of tires to a wet road is how the situation mainly played out for those who were out and about early in Philadelphia.

"I don't like the cold. That's why I'm just out here getting gas and right back in the house," Samuel Thomas of Roxborough said.

Steady rain that transitioned into wet snow was just enough for drivers to pay extra attention, especially on the hilly roads of Roxborough.

"I don't think it's too bad. I'm from Buffalo, New York, so I'm used to much heavier snow," David Lafferty of Manayunk said.

"I'm from Guatemala and this weather is hard for us because we are from hot weather," commuter Manuel Cabrera said.

This storm resulted in a Winter Weather Advisory, but it wasn't enough to cause major headaches in the city.

"You know, it is winter, so it's kind of hard to get around this weather," Lillian Hightower of Germantown said. "I think we've been really fortunate in the last couple winters, we haven't had a terrible snow storm, so I don't mind the cold."

It's expected to get colder.

Some people went ahead and started treating driveways, steps and sidewalks to avoid ice before temperatures drop later Thursday after the storm.

Officials are still urging drivers to be careful out there and to be aware that some roads may be slippery.

PennDOT said this will mainly be a salting operation for them.