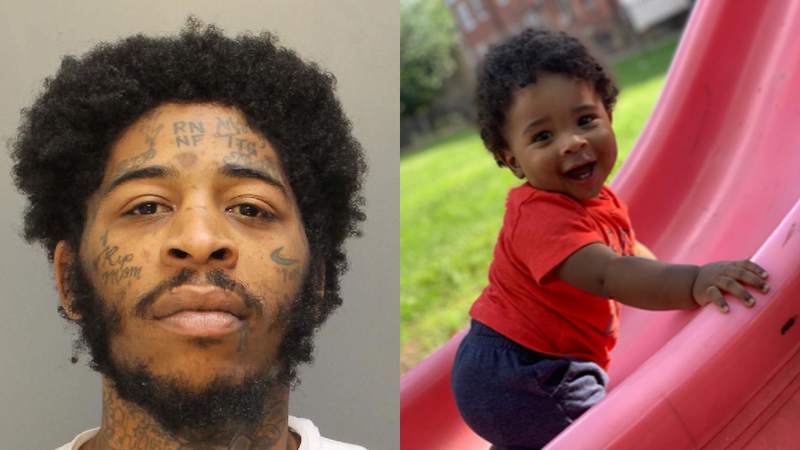 PHILADELPHIA (WPVI) -- The father of an 11-month-old boy, who was shot four times in Philadelphia last month, is now under arrest in connection with the shooting, the district attorney's office announced on Tuesday.

Yaseem Munir Jenkins was shot four times, including once in the head, while inside a vehicle in the city's Hunting Park section on October 19.

Authorities said the toddler was in the back seat of a car, along with his father, Nafes Monroe, his stepmother and another man when shots rang out.

Father used his son as a human shield during a shooting last month, the district attorney's office announced on November 12, 2019.

Investigators said Monroe used his son as a human shield to thwart off a potential upset drug dealer.

"It's our belief and our investigation has led us to believe that he intentionally had his child with him when he was making such types of purchases with the idea or belief that if someone saw that he had a child in the car that they would not fire upon him," Voci added. "A human shield is probably the term that I would use."

Even after the shooting, Voci said Monroe didn't rush his son to the hospital.

"He also was the individual that was not only in the car with his child in harm's way, but drove the child to a house rather than taking him to a hospital immediately, then dropped his child off at the hospital and never looked back," said Voci.

Yaseem Munir Jenkins continues to fight for his life.

A family spokesperson released this statement to Action News last month on behalf of Yaseem's mother:

"My son is fighting for his life and it is not fair. He's innocent, so precious, and his smile will brighten up anyone's day. He's such a bubbly kid. So loving and lovable. How could anyone be so heartless! Please do the right thing and help us find some form of closure or answers in this tragic situation. Help us find the shooter. I can't eat or sleep. I need justice for my baby...For the coward who did this to him, you will pay, even if it not today or tomorrow. God will handle you accordingly."