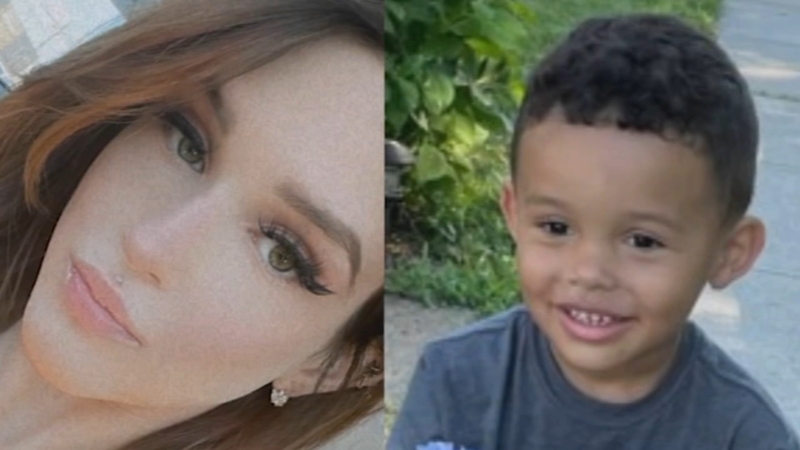 RAHWAY, New Jersey (WPVI) -- The body of a missing mother from New Jersey was found in Tennessee, according to her family.

It's the outcome her family and friends, who held a vigil for 24-year-old Yasemin Uyar in Highland Park Saturday, feared.

They believed she and Sebastian were taken by the boy's father, 27-year-old Tyler Rios, on Thursday from her apartment in Rahway against their will.

The man at the center of a community protest in Mount Laurel, New Jersey - sparked by his racist rant toward a neighbor that was caught on video - is now facing additional charges.

Authorities say Sebastian did not show up for daycare Friday, Uyar did not arrive for work, and she was not home when police officers carried out a wellness check.

Late Friday, Sebastian was found safe with his father at a family member's house in Monterey, Tennessee, but Uyar was still missing.

Later in the day, investigators found her body in a wooded area nearby.

The body of a missing mother from New Jersey was found in Tennessee, according to her family.

Neighbors and friends left flowers on the front steps of Uyar's Rahway home, a day after she was found dead.

"It's horrible as a mom, as a mother, as a woman -- you try to protect your family," said Patty Kiokenny.
Her family says she had a restraining order against Rios, who she has been trying to get away from and they had a long history of domestic violence.

"When you've had a child, and I call her a child because she's my child, who's dealt with domestic violence for a long period of time, in a way, in your mind you prepare for things. I never prepared, I don't think, fully for this moment, but I think there's a part of you, as the anger and the violence progresses in the relationship, where you know that there's a day where you may face this possibility," Uyar's grandmother, Karen Uyar, said.

Rios is in police custody in Tennessee and being extradited to New Jersey to face charges.

A couple with ties to the Delaware Valley was among the victims killed in the building collapse in Surfside, Florida.