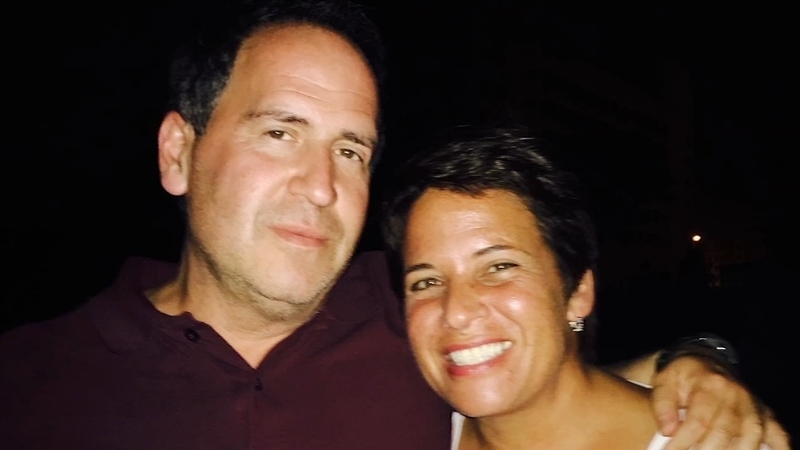 PHILADELPHIA (WPVI) -- A couple with ties to the Delaware Valley was among the victims killed in the building collapse in Surfside, Florida.

Prior to moving to Florida, Bonnie and David Epstein lived in the Philadelphia region. They were married for 31 years.

Both grew up in Northeast Philadelphia and attended high school and college in the city before meeting and settling down in Bucks County. Several years ago, they sold their Holland Township home and split their time between Brooklyn, Miami and their home in Ventnor, New Jersey.

The couple lived in unit 901 of Champlain Towers South with their dog Chase, according to Bonnie's cousin Joey Feldman.

David was a retired successful real estate investor who loved to jet ski and kite surf. The couple has a 26-year-old son, Jonathan, who lives in New York.

Their son Jonathan posted a message to Facebook this past weekend:

"Heartbroken to share that both of my parents' remains have been recovered by the rescue teams in Miami. Thank you to everyone for your kind words over this impossible week, my parents were really the best and it's been so comforting to relive the joy of their lives through the testimony of friends and loved ones. Mom and Dad-I love you both so much, and I'm so so proud to be your son"

Jonathan spoke to 6abc from his parents' Brooklyn home on Wednesday. He recalled texting his mother moments after the collapse.

"I texted my mom, 'Hey, are you guys OK?' And then, the message went from blue to green; it hadn't been received. I've spent so much time in their apartment, and I saw which part of the building collapsed and I knew there was no way," he said.

"They spent most of the summer in Ventnor. It was definitely a place where they relaxed as they loved the beach," he said. "My parents were just kind people to everyone, whether they just met you or if they had known you for a long time. They were generous and sweet; they lived life on their terms."

Jonathan has been posting updates in a Facebook group "Friends of Bonnie GWHS 82," which was created for Bonnie's classmates from George Washington High School in Philadelphia.

"My parents were amazing people and would be touched by the outpouring of love and support we've received," he said.

After Jonathan learned of the building collapse, he alerted his friends and family on social media.

"I'm in absolute shock and I don't know what happens next, but I'm so fortunate to have incredible friends and family taking care of me right now. Please give your loved ones an extra big hug today," he wrote in his initial Facebook post.

Joey Feldman, who lives in Los Angeles, said his cousin Bonnie was the closest he had to a sister growing up.

"We were both only children. She is directly responsible for so many things in my life. From my first curse word to my first concert; she introduced me to all the music I would still love to this day. I could keep going," Feldman said.

He called David "one of the best guys around."

"When he wasn't working, he was always about having a good time," Feldman said. "Their generosity towards my mother and myself will never be forgotten."

Feldman said his friends would join them at the Epsteins' Jersey Shore home in Ventnor during past summers.

"I've had some of the best times of my life with Bonnie," Feldman said.

Gail Karabell, another cousin of Bonnie, said she promised to watch over Jonathan and "always be there for him."

In a Facebook message, she said, "My dearest cousin Bonnie, the tears won't stop, my heart will be forever torn & broken. You've been taken away to soon, way to young. Your energy, your contagious laughter, your generosity, I could never get enough & always wanted to be around you. We shared tears, the best laughs, the ups the downs , family drama, our crazy sense of humor. All of these memories will be etched, treasured & carried in my heart forever."

"I loved you cuz, life will never be the same," Karabell said.