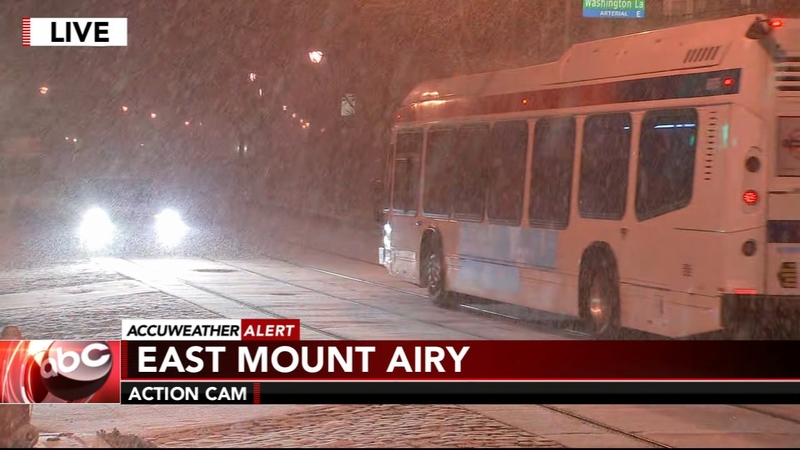 Winter Storm Warnings have been posted along the I-95 corridor and Winter Weather Advisories have been issued into parts of New Jersey and Delaware.

The City of Philadelphia declared a snow emergency at 6 a.m. Many of the surrounding Philadelphia counties have also declared emergencies. You can find a full list, here.

At the PennDOT salt yard in Norristown, Pennsylvania, crews were getting the trucks loaded up and ready to go for yet another snowstorm across the region.

The Philadelphia region is bracing for more snow on Thursday. Winter Storm Warnings are posted along the I-95 corridor and Winter Weather Advisories have been issued into parts of New Jersey and Delaware.

"We've used more than 50,000 tons so far and we still have about more than 75,000 tons of salt on hand. So we have more than enough to get us through this storm and the rest of the season," said Chelsea Lacey-Mabe with PennDOT.

SEE ALSO: Winter weather can be hard on your heart: Here are some symptoms to look out for
EMBED More News Videos

As we track more snow, we have another warning: new research suggests winter weather can be hard on the heart. Here are some symptoms to look out for.

At Stanley's True Value Hardware in Philadelphia's Roxborough section, people were stocking up on salt and ice melt.

"It's been selling regularly all day and of course the supply is dwindling, but we still have some," said manager Al Powell.

"I know, I'm done with it," said Maureen Brown of Roxborough.

There was also a run on shovels because apparently, the storms have taken their toll on many of them.

"The ice is pretty thick so when you try to break the ice with a shovel, it just cracks, our shovel cracked," said Dimitry Belogorodski of Roxborough.

Send us your videos and photos from the snow at 6abc.com/Share

We did actually find one customer who is looking forward to lots of snow and prepping for it.

"Salt, shovel, charcoal, try to cook some ribs, and hopefully it snows a lot. I'm tired of a little three inches, let's get a lot of stuff," said Rob Small of Roxborough.

According to the AccuWeather team, the snow gradually pushes into the region during the morning commute, turning roads slippery. The snow gains in intensity during the mid-morning and early afternoon, before lessening a bit later in the day. A change to freezing rain and sleet is likely during the afternoon closer to I-95, although that mixing line may pull up just short of the Delaware River. The high is a cold 30.