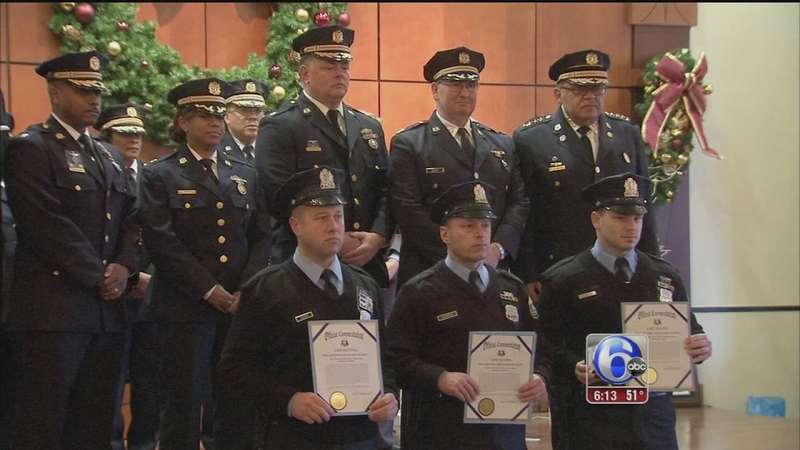 PHILADELPHIA (WPVI) -- More than 50 men and women in blue received awards ranging from bravery and heroism to excellence on Wednesday.

Held at the Philadelphia Fraternal Order of Police Lodge #5, top brass did the honors as proud family members watched on.

"I am so proud, I really am," said Dee Keenan, whose son received an award. "It's like you get the cross between being afraid and being proud of what he does."

Her son, Sgt. Dennis Keenan, is one of five from the 24th District who received a bravery award after an armed murder suspect opened fire on them in the city's Port Richmond section in June.

"Your training kicks in, and you think about yourself and your fellow officers and the public and make sure they're safe," said Sgt. Dennis Keenan.

A Medal of Valor was named for Sgt. Robert Wilson who was fatally shot while trying to foil a robbery, and a Medal of Life Saving was given to Officer Lamar Poole who died earlier this year after he was hit and killed by an alleged drunk driver while off duty.

New this year is the Tactical De-escalation Award.

"There's been a lot of focus on use of force, but there are a lot of times when officers don't use force even though they could," said Police Commissioner Charles Ramsey.

Officer Tynisha Smith received the award after a mentally unstable woman charged her and fellow officers with a knife.

"She stated she was going to kill us, and instead of it going far we talked to her," said Smith. "We had to use the Taser."

The event marks the last time Commissioner Ramsey will be handing out awards to the Philadelphia Police Department since he ends his run as commissioner in January.

"It's a good time for me because it reminds me of the excellent police work that goes on every day," said Ramsey.