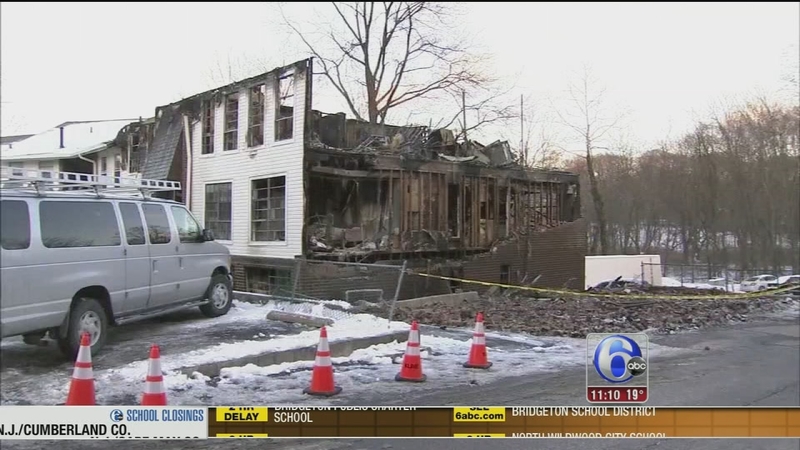 GLOUCESTER TWP., N.J. (WPVI) -- Dozens of people spent the night in a shelter, after a 3-alarm fire ravaged an apartment building in Gloucester Township, Camden County.

The fire started just before 10 p.m. Saturday at Lakeview Apartments, located on the 500 block of Lower Landing Road.

"I literally ran into the fire to bang on doors. My neighbors were asleep. I kicked on his door and ran to another door, I kicked on the door," said Mikhel Harrison of Gloucester Township.

Mickel Harrison says he ran from door to door trying to wake his sleeping neighbors, who were unaware of a fire that was quickly sweeping through building 72.

"I heard two little girls screaming and the police officer went upstairs and he came out with them," said Harrison.

The terrified girls were rescued from a second-floor room, now unrecognizable with the fire leaving behind just a charred frame.

"There were no bells. I didn't hear a smoke detector go off. My smoke detector didn't go off, and my apartment was filled with smoke," said Harrison.

Alexis Strube, whose apartment was completely destroyed, has other complaints from incidents that occurred well before the blaze - about two months ago.

"The apartment actually almost caught fire, the fuse box lit on fire, we called maintenance. And then a second time an outlet of ours burst into flames while I was vacuuming the apartment," said Strube of Gloucester Township.

Strube says although the outlets were changed as was the fuse box, no one came to look into the source of the electrical fires.

"The fact that no one checked up on it after two fires in our apartment, that's ridiculous," said Strube. "This absolutely could've been prevented."

A total of 75 residents were displaced, many of them elderly. But everyone survived. Something Harrison says he's thankful for.

"To be completely honest, just with the size of the fire, if I didn't bang on the doors any time sooner, my neighbors, they probably wouldn't be here," said Harrison.