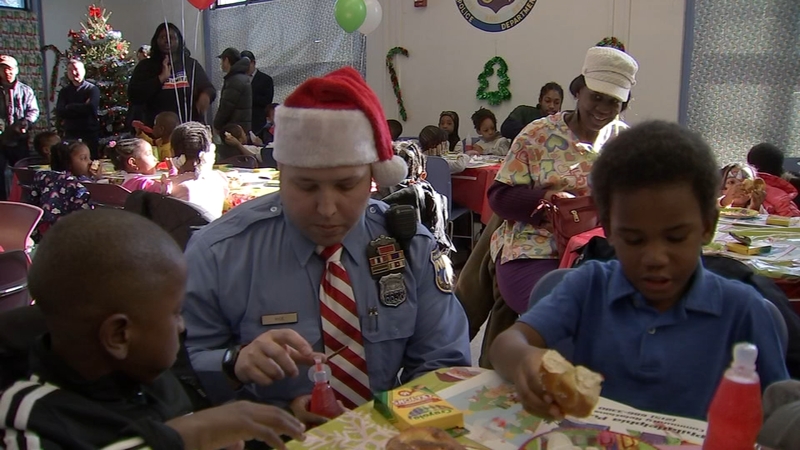 PHILADELPHIA (WPVI) -- It was one of the darkest days in Philadelphia's history.

6 officers shot during a standoff which sent dozens of children in that area on lock down, but this holiday season those kids are being treated to a day of fun

The Philadelphia police officers who serve Tioga-Nicetown are making their days bright.

Action News is glad to welcome back reporter/anchor Erin O'Hearn who is here in the studio with more on this story. Erin

The holiday season is filled with parties and celebrations, but this particular one reminds us all of the resilience of children and the strength of the Philadelphia community.

Every December, Police officers in the 39th district don Santa hats along with their badges to host a children's holiday party, but today the annual event was attended by many of the children who were carried to safety during August's Tioga-Nicetown shooting.

Officials say at least 80 kids were escorted from day cares and schools while officers got the situation under control.

Thursday morning, a reminder that their contribution to the community doesn't just happen in wake of tragedy.

Joel Rice Philadelphia Police Department 39th District says "When we are doing enforcement we look like the bad guys we are mean and we are enforcing the law and we need that to keep society safe but it's important for people to know we are actually here to help people."

The kids got into the Christmas spirit with face painting, balloons, gifts and some art projects with some hands on help from their law enforcement friends.

The officers also made a special call into Santa who paid an early visit from the North Pole.

Those kids went through such a traumatic experience a few months ago.