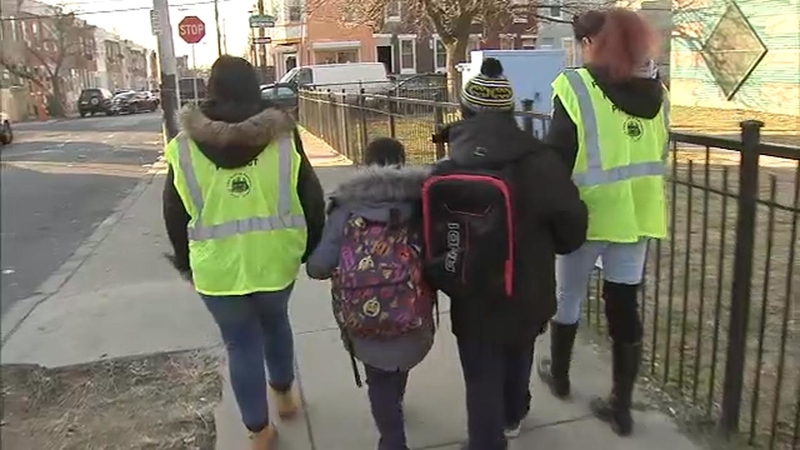 New program seeks to shield kids from drugs in Kensington

PHILADELPHIA (WPVI) -- Keeping children safe when they travel to and from school is the goal of a new initiative in Philadelphia.

Speaking to some of the youngest kids here, they can tell you they see needles on the way to school.

This is the epicenter of the opioid crisis in Philadelphia right now.

The city and the community are working together to make sure kids get to school safely.

Principal Charlotte Maddox began her teaching career at Elkin School in Kensington 20 years ago. She knows the walk to and from her school is not always a safe one.

"Late last spring I received a phone call from a parent who shared that her child was in the emergency room because as she walked to school she stepped on a hypodermic needle," she said.

Now students will see volunteers in neon vests as they approach the school on Rorer near Clearfield for the Safe Corridor initiative.
Most volunteers- parents they're vetted and trained, handed identification cards. They are told who to call to clean up drug paraphernalia left behind.

Parent volunteer Lambert Telesford is one of the first, knowing firsthand the dangers he and his six-year-old son see each day.

"Needles on the ground," said Randy.

"The kids they're passing by. They have to see them tying- preparing to inject themselves, it's just not fair to the kids," said Telesford.

The initiative is part of the Philadelphia resilience project.

ResilientPHL began two months ago with the mayors' executive order declaring a citywide emergency and creating an opioid emergency response team made up of 35 different agencies.

"Us as parents are afraid to come outside. So can you imagine a kid that's in kindergarten first-grade second grade walking to school all alone because the parent has to go to work," said Dalia Burgos.

Fifteen schools in Kensington neighborhoods have been prioritized in this initiative.

Elkin School is one of the first with volunteers, they hope to add more and build out, reducing children's exposure to people struggling with substance abuse and discarded drug paraphernalia, reassuring children they are not alone.

"Our students need someone they can count on," added Maddox.