Sphinx at Penn Museum is on the move 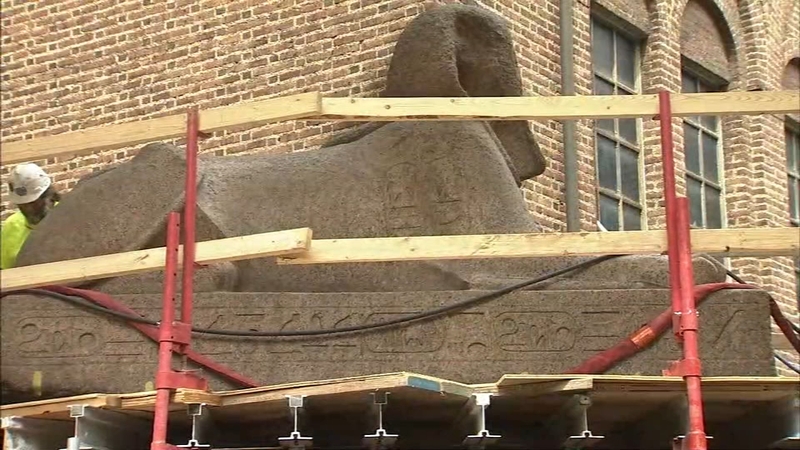 Sphinx at Penn Museum is on the move

PHILADELPHIA (WPVI) -- The iconic sphinx at the Penn Museum is on the move!

On Tuesday morning, the largest sphinx in the western hemisphere moved its first few feet. It will travel 250 feet to its new home in the main entrance hall, which is being redesigned.

The interior move started Tuesday. The exterior move is happening Wednesday, ahead of schedule. There will be viewing areas for the public with museum admission.

Curator Jen Wegner explained, "This is a massive undertaking."

Moving an artifact of this size, of this age, poses a number of logistical concerns.

This sphinx must go through doorways, throughout window frames. It will travel along a slightly inclined ramp through the inner courtyard up into the redesigned gallery space, where it will take center stage.

"There is a system of air dollies that uses pressurized air to lift very heavy weight. So, there are four of those dollies under each corner of the sphinx. The air allows it to slide, almost like an air hockey table," described Wegner.

The sphinx moved into the Egypt gallery in 1926. This will be the first time it has seen daylight in nearly a century.

Structural engineers worked to determine how to safely accommodate the statue's weight elsewhere in the building.

The sphinx is expected to reach its new home on Wednesday, but you won't be able to visit just yet.