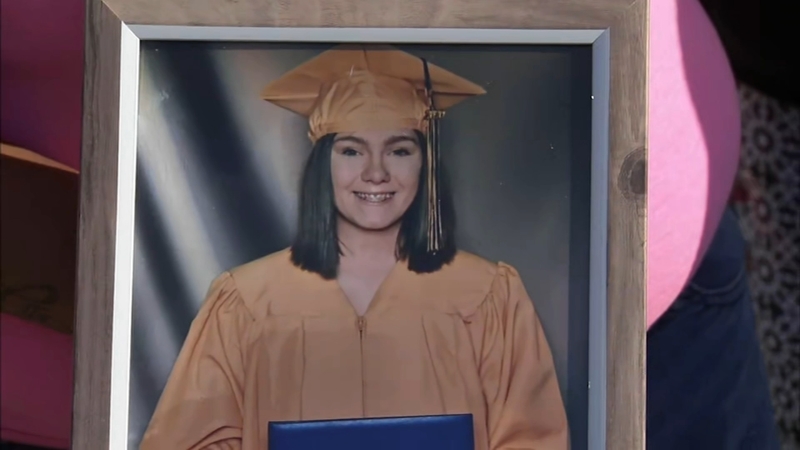 GLENOLDEN, Pennsylvania (WPVI) -- Family and friends of an 18-year-old woman killed in a crash in Delaware County came to together for a vigil Friday night at the site that is now marked with flowers.

The group of mourners wore purple - Angel McIntyre's favorite color - as they remembered the teenager who had just graduated from Sun Valley High School.

One person is dead and multiple others were injured after a police chase lead to a crash in Delaware County.

Police said the fatal crash was triggered by a routine traffic stop.

Collingdale police said the incident began around 1 a.m. Thursday when an officer pulled over the driver of a Ford Escape for a traffic violation at MacDade Boulevard and Chester Pike.

The officer said when he exited his car to approach the vehicle, the driver, later identified as 26-year-old Anthony Jones of Chester, drove away.

Police said Jones then turned into a McDonald's located on MacDade Boulevard in Darby and pulled over. But once again, when the officer exited the patrol car, he sped away, ramming a police vehicle in the process.

Jones' SUV then collided with a car with teenagers Matt Munafo and Angel McIntyre inside at the intersection of MacDade Boulevard and Oak Lane in Glenolden.

Police said Jones ran away from the scene, leaving his three children, ages 3, 5 and 7, behind along with two injured females and illegally owned guns.

Jones was subsequently apprehended and arrested. He admitted to being on drugs, police said.

The impact of the crash was so intense, McIntyre died at the scene.

Munafo was taken to the hospital and remains critically injured.

Family and friends said McIntyre's sister was in the car behind and watched her sister pass.

"No excuses. It's not fair he took a life," said family friend Noreen Kilgore.

"Her life was cut short because of some reckless behavior and it's not fair. She just graduated," said family friend Ashley Whalen.

McIntyre was set to start at Keystone College in the fall.

Now, a makeshift memorial represents a grim reminder of the plans once on the horizon.

"We drive by here every single day. So every day you drive by, it's just going to be a reminder; it's not fair," Whalen said.