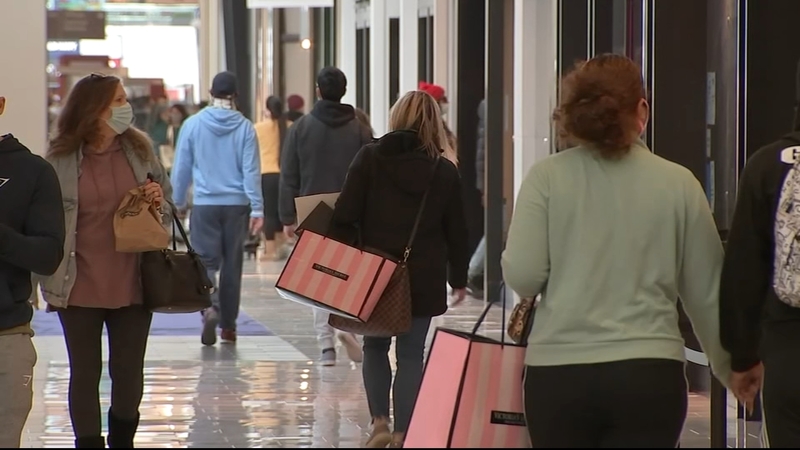 CHERRY HILL, New Jersey (WPVI) -- For some, the mall was their last resort. They were hoping to get all of their packages shipped to their house, but with delays from the coronavirus vaccine shipments, to staffing issues, to the snow, they're running around the mall in person.

"It just feels good to get out and walk around, we haven't been able to do that," said Bella Fioravanti of Bensalem.

Shoppers taking to the malls at off-peak hours were hoping to avoid large crowds and long lines.

But things weren't too different by Tuesday afternoon.

"I avoid everything by coming out early in the morning and picking up what I had to come get," said Tanya Green, of Pennsauken.

Although if you're in the market for a Pandora charm, you may be out of luck.

"The Pandora line was really long, but they move it fast so it's pretty good," said Arlene Arcelay, of North Philadelphia.

There isn't a spot to be found at the Nordstrom curbside pick up area.

"Everybody's doing it," said Rosemary McAfee, "The stalls are all filled up I'm kind of on the curb here."

Officials at Cherry Hill Mall say the conversion rate is up, which means that people are coming into stores with a purpose and they're leaving with a lot of bags.

With the pandemic plaguing the economy, shopper Oscar Alvarez has a theory about renewed consumer confidence.

"Now that the stimulus got approved, it seems like people are now going to come of and say hey, we're getting a check next week," says Alvarez.

The online method is breaking records this year with an estimated $189 billion in US sales according to Adobe Analytics. But shipping delays have people rushing around shopping in person.

"We just ordered some boots and I don't think they're going to be here in time. So, I said, 'Let me buy something,' So I have something on the 25th to open for my daughter," said Arcelay.
Report a correction or typo
Related topics:
businesscherry hillholiday shoppingholidaybusinesscoronavirus
Copyright © 2022 WPVI-TV. All Rights Reserved.
TOP STORIES
AccuWeather Alert: Tracking Severe Storms Today
Retired cop who confronted gunman in Buffalo shooting hailed as 'hero'
63-year-old woman killed by driver at Jersey Shore: Police
School Closings
Find out which schools are closed in your district.
What is white replacement theory? Belief fueling racist attacks
Penn Live Arts celebrates 50th anniversary with packed lineup
Man shot while getting water ice in Philly
Show More
What we know about the victims of the Buffalo shooting
22-year-old NJ officer, recently sworn in, dies in motorcycle crash
Emotional support dogs from Cherry Hill on way to Buffalo
John Fetterman, Senate candidate, recovering after stroke
Alleged Buffalo shooter's prior threat, hospital stay face scrutiny
More TOP STORIES News