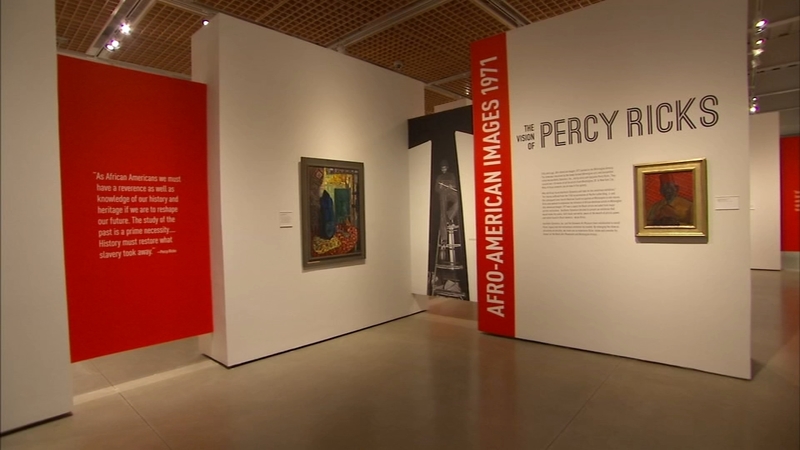 WILMINGTON, Del. (WPVI) -- The Delaware Museum of Art is restaging a pivotal 1970's art exhibition honoring African American artists and educators who were rejected by the museum a half-century ago.

Christie Ileto has the story in this week's 6abc Loves the Arts.

Afro American Images 1971, The Vision of Percy Ricks takes visitors back in time.

"This is a restaging of a landmark show that was held in 1971," says Margaret Winslow, the Curator of Contemporary Art at the Delaware Art Museum.

There are works by 66 African American artists, curated by Percy Ricks.

"He was really thinking beyond his time and also putting in perspective how the mainstream had pretty much marginalized African American artists," says James E. Newton, ED.D, artist and member of Aesthetic Dynamics, Inc.

The exhibition starts with an introduction of Aesthetic Dynamics, a multiracial artist collective founded by Ricks.

That was his vision to bring artists and musicians under one umbrella," says Arnold S. Hurtt, Vice President of the Aesthetic Dynamics, Inc.

The group was founded in the wake of the 1968 assassination of Dr. Martin Luther King

"It was needed because that was during the riots," says Hurtt.

Delaware's governor had sent the National Guard to Wilmington for an extended military occupation.

"They wanted to present an exhibition that celebrated artistic creativity that provided inspiration," says Winslow.

The second part of the exhibition explores Ricks' wide network of connections.

"Ricks had, matriculated at Howard University at the age of 16," says Hurtt.

He studied under James A Porter.

Back in 1971, Ricks wanted to stage the exhibition at the Delaware Art Museum

"The Delaware Armory became the place for it to be," Newton says.

But a half-century later, Percy Ricks is getting his wish.

"His real message is that the arts could be used as a mode and form of communication," says Newton.

The Vision of Percy Ricks is on view at the Delaware Art Museum through January 23rd. You can find the link for tickets at 6abc dot com slash loves the arts.