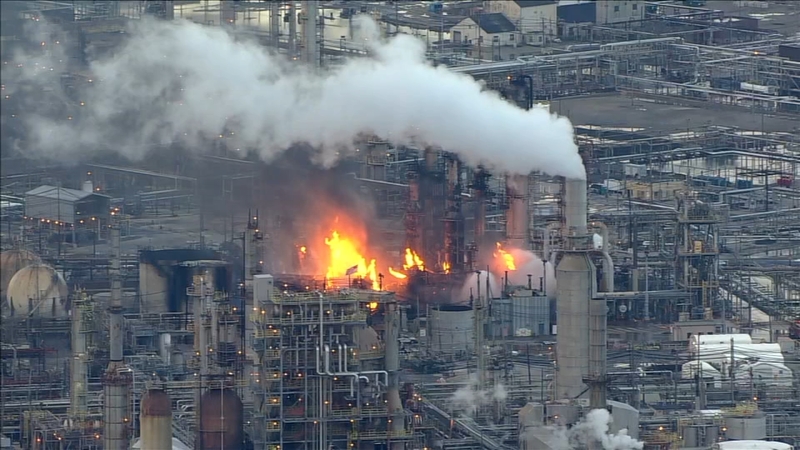 PHILADELPHIA (WPVI) -- This morning's explosions and fire at the Philadelphia Energy Solutions refinery woke up thousands with its ball of fire.

Four hours after the explosions, the Philadelphia Department of Public Health tweeted, "No findings that would point to any immediate danger in the surrounding community."

However, health experts say the pollution released by it could affect some people for days.

Peter DeCarlo, an outside air quality expert at Drexel University, says initial air quality tests typically only look for extremely toxic gases such as carbon monoxide or hydrogen sulfide which would pose a risk for first responders.

"They weren't monitoring the whole suite of pollutants you'd expect from a fire," DeCarlo continued.

City officials say the fire is burning butane and propane, which are similar.

"Propane itself isn't as much of a concern at low levels, but, really those by-products of the fire still burning, the fact that it didn't burn completely," DeCarlo continues.

And Julie Becker, Ph.D., M.P.H., director of the public health program at the University of the Sciences, agrees that the big concern is not knowing what IS in the air.

"Whenever you see a large black plume, it means there is something that''s not burned, and there is pollution going up," says Becker.

That incomplete burning produces a lot of particles that travel with the wind.

"These particles can spread quite a distance. It depends on what's in them," she says.

Dr. Becker says the particles get into the lungs, with children, the elderly and anyone with a respiratory condition like asthma, COPD, or emphysema are most at risk.

"This is sort of a waiting game, and a bit of patience is required," until all the tests are in.

And the scope of the spread is also uncertain, dependent on wind, weather, and geography.

Because of the Delaware Valley's geography, Dr. Becker says there are often air inversions, so pollution can linger in this area more than it would on a flat plain.

Until we know what the pollution contains, people should be on the lookout for these symptoms: tightness of chest, difficulty breathing, coughing, and one that's often missed.