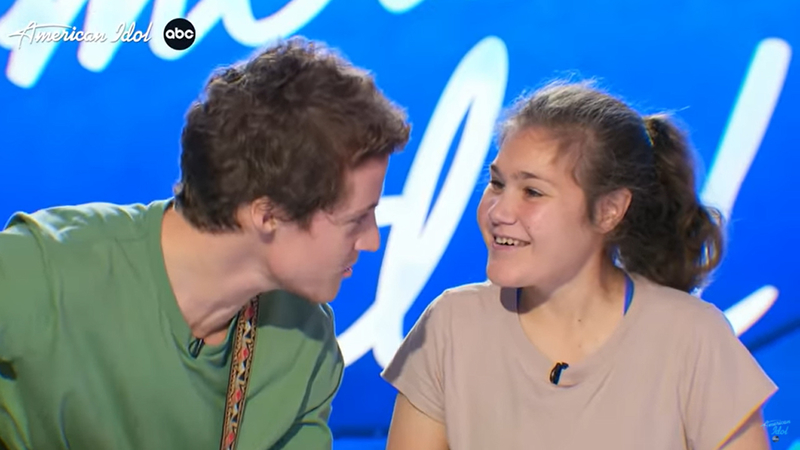 One emotional audition saw a Jersey Shore singer/songwriter performing in front of the judges - along with his younger sister.

Twenty-two-year-old Cole Hallman from Manasquan only started playing guitar and singing a few years ago.

"I'm a singer/songwriter, and my vibe changes sometimes," Cole told Action News, of his style. "Sometimes it's a full band thing. Sometimes it's an acoustic thing. It's mostly musicians inspired by singer and songwriters I look up to."

Once a bar-back at the legendary Stone Pony in Asbury Park, Cole had a chance to perform there, like one of his inspirations, Bruce Springsteen.

Cole recently graduated college and was student-teaching in a 4th-grade class when he decided to try out for Idol.

For his American Idol audition, Cole was joined by his mother Nicole and younger sister Katie, who has special needs.

"My sister is obsessed with the show," Cole said. "She is very excited to be here."

Cole explained Katie has a chromosomal deletion which caused developmental and behavioral issues.

"But I'm grateful to have her here. She keeps me calm," Cole said.

He also called her his number one critic and biggest fan.

Cole called himself a late bloomer when it comes to music. He said he felt a little unprepared for the audition and a little out of place.

Judge Katie Perry saw that Cole seemed nervous once he was out in front of them.

That's when judge Lionel Richie had some advice for Cole.

"Let me tell you something. We still feel that way. It never goes away, it just makes you better," Richie said.

Even a seemingly wrong note didn't steer the judges away from Cole.

"You think you a hit a bad note at the end?" Perry asked.

Bryan summed it up for Cole.

"If you play the whole song with an out-of-tune guitar and Katie Perry doesn't throw a penalty flag at you that means we're all into kind of what you're doing," Bryan said.

"We may have a place for you in this competition," Richie said.

"You can just hear your heart," Perry said. "Your heart is just in your voice. It's so raw and passionate."

The judges asked Cole if he'd like to bring his family into the room so they can hear their decision.

Nicole and Katie walked in and joined Cole. Katie gave her big brother a big hug.

Perry mentioned she heard that the brother and sister sing together. Katie gave a big nod.

"We usually sing 'You Can't Always Get What You Want' because it's easy to remember the chorus," Cole said.

Though Perry offered to sing with Katie, the young girl wanted to only sing with her big brother.

Cole began singing their rendition of The Rolling Stones' hit as a wide smile appeared on Katie's face.

When it got to the chorus, Katie joined in singing with her brother.

Bryan called Cole's performance with his sister 20-percent better than his original.

"Shed the nerves and sing like you're always going to be singing with your sister," Perry said.

"I think that's the best takeaway," Cole told Action News. "That's something she'll never forget, and I will never forget it either."

The three then gave the judgment: Cole Hallman is going to Hollywood!

Catch Cole and other local hopefuls Sundays at 8 p.m. on Season 20 of "American Idol."

Meet Camryn Champion, a high school junior in Burlington County who says she's been singing since she can talk.