Officials said because the fire was in the hallway, the family's only escape route was through the windows.
WPVI
By Trish Hartman 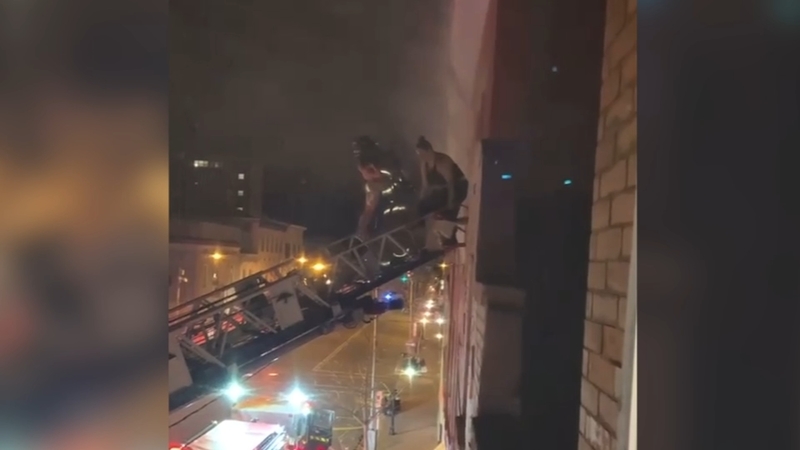 MILLVILLE, New Jersey (WPVI) -- A ladder rescue during a fire in Millville, New Jersey earlier this week was caught on video.

The cell phone video, recorded by a neighbor, shows two firefighters bring a family of four to safety on Monday morning when an apartment building caught fire just after midnight.

"I was very anxious," said firefighter Kevin Hall. "But I also reverted back to my training and told myself, 'Keep yourself calm.'"

Hall was one of two firefighters on the ladder in the 100 block of North High Street.

Two adults and two small children were desperate for rescue as smoke seeped from the windows.

Officials said because the fire was in the hallway, the family's only escape route was through the windows.

"There was heavy fire," said Fire Chief Michael Lippincott. "Smoke and heat in the hallway which was blocking access and egress from the apartment units."

As anxious as Hall was, he said his focus was to keep the children calm.

"You tell them, it's ok, we're here to help you," explained Hall, an 11 year veteran of the department. "We're going to get you out of here. Specifically, with the little girl, I told her to hold on tight to me and don't let go. And she said 'OK.' And that's what we did."

All four family members were taken to the hospital for smoke inhalation and later released.

Hall says he's done this many times in training, but this was his first real ladder rescue.

"It makes me feel very proud and happy to have assisted them in making sure their lives were spared and that the outcome was positive," said Hall.

The fire chief said the family bought themselves more time that night, by keeping their doors closed so the fire didn't spread faster.