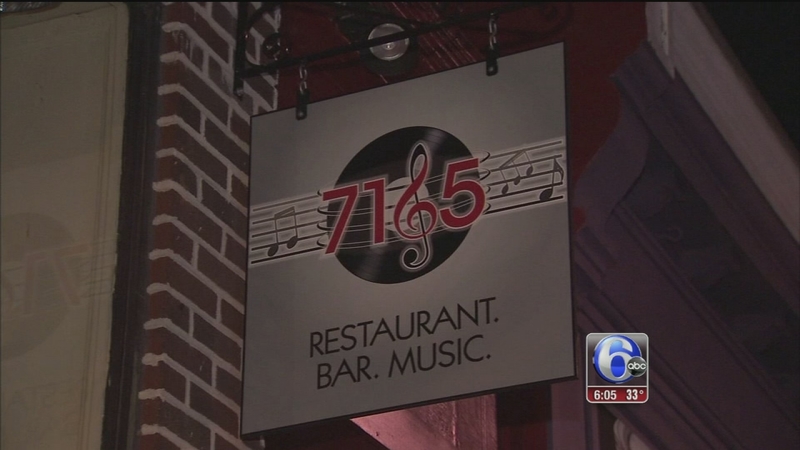 Police say a fight began brewing inside the establishment, where 20 people had gathered for an open mic night.

After the bar closed, the fight continued outside.

It ended when, police say, a man in his late 20s or early 30s pulled a handgun out of a maroon-colored vehicle, opened fire then fled.

"And that's when their was an argument. The argument turned into a physical altercation and that's when someone pulled a gun and fired," said Chief Inspector Scott Small.

4 people shot outside bar in East Mount Airy after argument turned physical. One victim was a bartender trying to calm everyone down.

Action News spoke with a witness who says it was chaos.

"And when we look out we see people scattering in the streets, running, hiding behind cars and the doorways of the buildings," said Moses, who lives next door. "I heard another man scream, 'I have all bullet holes in me, bro. I have all holes in me.' "

Three customers and a bartender were hit by the gunfire.

Police arrived on the scene, where they found people scattering and cars speeding away.

Officers followed one of the cars, which ended up crashing into a pole at Germantown Avenue and West Upsal Street.

Police found a 26-year-old man in the back seat with multiple gunshot wounds and rushed him to Einstein Medical Center in critical condition.

Two other victims were able to get themselves to area hospitals.

A 26-year-old man suffered a gunshot wound to the hand. He's also at Einstein.

The other victim, a 25-year-old man, was hospitalized at Chestnut Hill Hospital with a wound to his torso and leg. He has been transferred to Temple University Hospital.

The fourth victim is a 26-year-old bartender, who said she went outside with other bar employees to try and calm things down, but ended up with a gunshot wound to the knee.

Medics took her to Einstein.

She and the two men, who got themselves to hospitals, are all said to be in stable condition.

"I've never heard any problems out of there as long as I've been around here," said Mike Carter.

"Oh my goodness. I just don't want this to become the norm," said Layla Muhammad.

Local business owners like Greg Locke of Vendors Boutique say this is still a safe part of town.

"There's too many innocent people being shot, too many, and it needs to stop, it really needs to stop. And that's the aggravating part, because this is a beautiful neighborhood," said Locke.

The owner of the bar says he feels terrible this happened, and as a result, it'll be closed until further notice.

Police are working to determine if the three male victims were involved in the original fight or if they were struck by stray bullets.

The suspect is described as a black male, late 20s to early 30s, brown complexion, with dreadlocks. He possibly retrieved the gun from a red- or maroon-colored car.

There are surveillance cameras inside and outside the bar and several witnesses to help in providing information.

Anyone with information is asked to call Philadelphia Police Northwest Detectives at 215-686-3353 or 911.