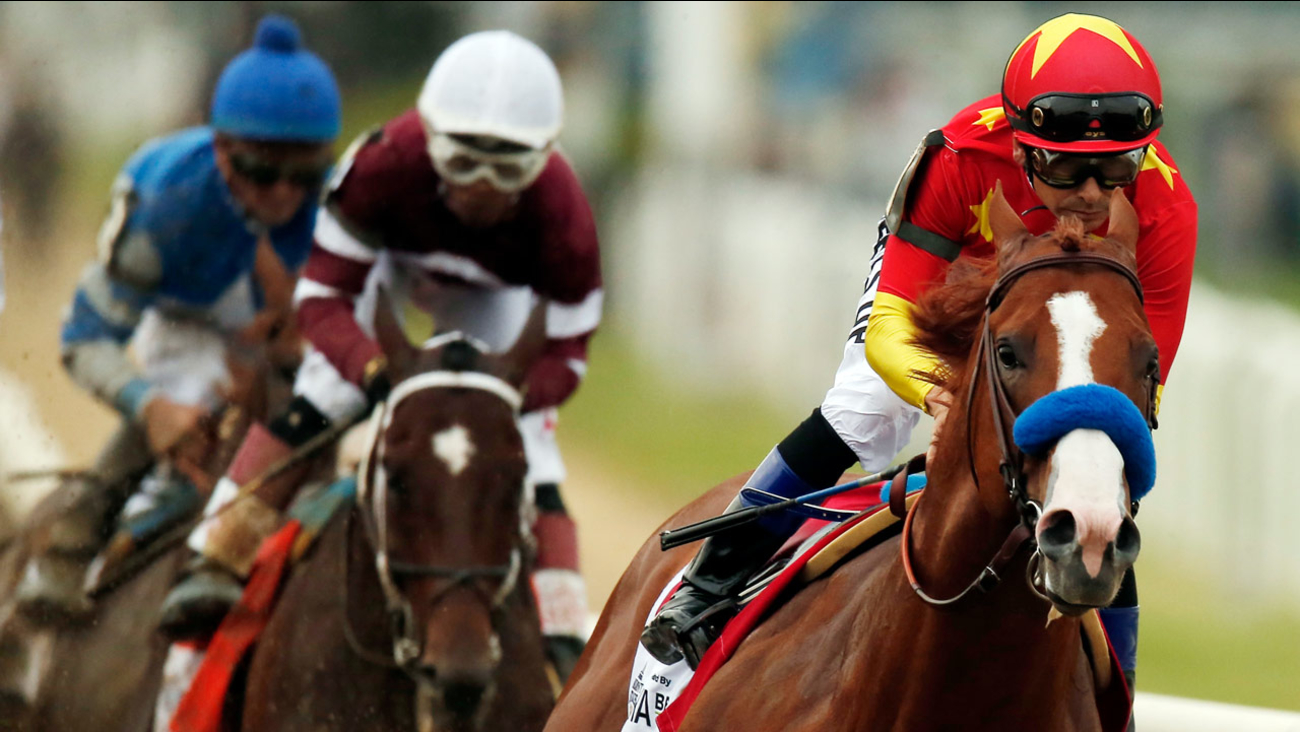 Justify (1), with jockey Mike Smith up, leads the pack as it approaches the first turn during the 150th running of the Belmont Stakes horse race, Saturday, June 9, 2018. (AP Photo/Andres Kudacki)

Justify defied all the odds on his way to achieving Triple Crown immortality.

The late bloomer won the Belmont Stakes by 1 lengths on Saturday, giving the sport its 13th Triple Crown champion. American Pharoah ended a 37-year drought in 2015 and now just four years later, racing is celebrating another sweep of the Kentucky Derby, Preakness and Belmont.

Justify began his racing career on Feb. 18, a scant 77 days before the Derby. He won his first three races by a combined 19 lengths, making trainer Bob Baffert a believer.

The big chestnut colt with the appetite to match burst onto the national scene with a 2-length victory on a sloppy track in the Derby. Two weeks later, he survived a challenge in the fog-shrouded Preakness, winning by a half-length, again in the slop to set up a Triple Crown try.

"The raw talent is there," Baffert said. "He just came on there and broke every curse there was. It was meant to be."

On a cloudy 80-degree day at Belmont Park, Justify proved a cool customer.

He didn't flinch when greeted by 90,327 roaring fans as he walked onto the track. He stood so quietly in the starting gate that jockey Mike Smith wondered if he'd respond when it sprang open.

Justify led all the way in achieving one of the sports world's toughest feats 45 years to the day that Secretariat won the Belmont by a record 31 lengths. Baffert called Justify one of the all-time greats.

"I think he's the greatest of all time," Smith said. "I just won the Triple Crown, man. He's my champion."

The dream is now a reality!

Justify accomplished a lot in a very short time.

At 6-0, he joins Seattle Slew in 1977 as the only two undefeated Triple Crown winners; he's the first to sweep the series without racing at age 2 (because of a pulled muscle); and he's the only horse to beat nine rivals in the Belmont with a Triple try on the line. Slew also was a wire-to-wire Belmont winner.

At 52, Smith became the oldest jockey to win the Triple Crown. He celebrated by grabbing white carnations from the winner's blanket and tossing them in the air.

"He just puts an old man out there to sit still, who stays out of the way and lets a good horse be a good horse," Smith said, crediting Baffert for using him.

Smith and Justify took a curtain call before entering the winner's circle. Back in New York where he dominated in the 1990s, Smith took Justify on a walk past the packed grandstand, soaking in the cheers and giving the crowd a closer look at racing's newest hero.

Justify's victory gives racing its second Triple Crown winner of the decade. The last time there were two Triple Crown champions in the same decade was the 1970s, which produced Secretariat, Seattle Slew and Affirmed.

The powerful colt with the blaze running the length of his face showed no signs that the rigors of running a compressed schedule had gotten to him.

On a fast, dry track, Justify was just as good in his third race in five weeks at his third different track.

"This horse ran a tremendous race, he's so gifted," Smith said. "He's sent from heaven. I tell you, it's just amazing."

Baffert had fretted after Justify drew the No. 1 post, a spot he detests for his horses. But Smith turned it into an advantage, gunning Justify to the lead and defying any horse to challenge.

Restoring Hope, also trained by Baffert, ran interference for the champion while traveling second and deterring any threats by forcing them to go extremely wide. Nobody did.

Smith got the colt into a relaxed rhythm under a moderate pace heading into the backstretch, and he had an easy trip from there.

"You can't doubt him now, there's no way," said Bill Mott, trainer of third-place Hofburg. "He did it right up on the pace, and everybody had an opportunity to take their shot. They didn't do it. They let it go too easy."

There were mild bids turning for home. Vino Rosso made the most serious move to get within a length but never threatened. Justify pulled away down the 1,097-yard stretch in front of screaming fans with only 24-1 shot Gronkowski picking off a half-dozen rivals in taking up the chase down the lane.

"My thought turning for home was that he had a shot to get him if Justify was vulnerable at mile and a half," said Chad Brown, who trains Gronkowski. "I thought maybe, because I could see Gronkowski flying, but he just couldn't get to that horse."

Gronkowski, named for and partly owned by New England Patriots tight end Rob Gronkowski , returned $13.80 and $7 in his U.S. debut after arriving from England.