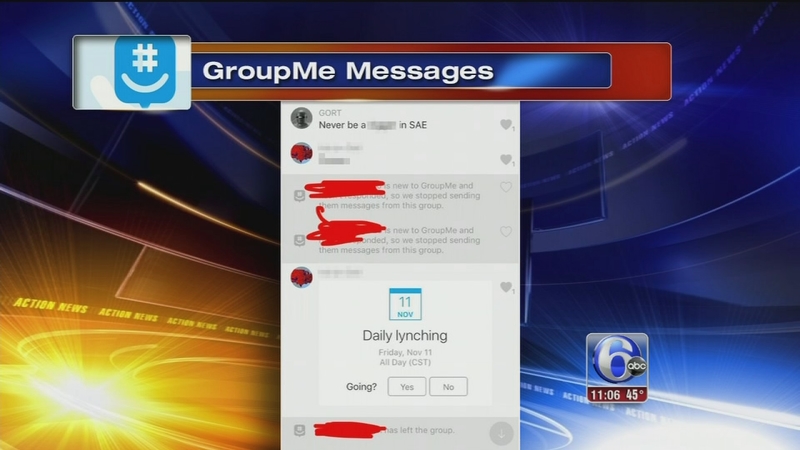 Administrators at Oklahoma said they temporarily suspended that student as they continue to investigate the origin of the messages.

In a statement Sunday, Penn officials say they have concluded their criminal investigation, and have determined no Penn students are associated with the sending of the racist messages.

"We are deeply saddened that Penn students were the victims of this hate, to which absolutely nobody should be subjected. ... We will continue the work of healing with members of our community," school officials said in a statement.

The Philadelphia NAACP has joined the growing outcry condemning racist online messages targeting black students at the University of Pennsylvania.

"As long as the language is divisive and not inclusive, as long as language... leads to intolerance of one and the other prevails, we can expect for acts like this to take place," said Minister Rodney Muhammad, President of the Philadelphia NAACP.

For those wondering how the racists attacks have impacted those young students, one of their friends tells us there's no doubt they're hurt.

"They were just really scared. I kept finding them and hugging them and talking to them because it's something really bad," said Nicholas Alvelo, Penn sophomore.

On Saturday, some were pointing the blame on president-elect Donald Trump and his campaign.

The fact that he's a graduate of Penn, many are calling on him to respond and condemn.

"He should issue some sort of message he doesn't support actions like this," said Becca Gearhart, Penn freshman.

Nate Morris is one of those who found himself added to a racist Group Me account Friday. The messages on an account called Mud Men included racial slurs.

"I felt scared because I didn't know where this was coming from," said Morris, Penn freshman. "They made a calendar event saying that it's 'Lynch Day,' and they're going to try to find any black person they can lynch."

A number of black freshman students who were targeted gathered at a private meeting to discuss the incident. Outside hundreds marched through Penn's campus in protest.

"I was absolutely shocked. This is one of the last places I'd expect something like that," said Shelley Thomas, Penn Grad student.

"This is the opportunity to get back together again, and to have a positive attitude about things," said Kenney.

While on campus, we noticed something different about the Oldenburg Sculpture.

A safety pin has been added by art student Jeremy Jirsa.

"I thought it would be a good opportunity to use the safety pin as a representation to bring our city together," said Jirsa, Penn student.

He hopes this can spark the first step in moving on from this.

"Were here to love each other during these times when we need it most," said Jirsa.

In a statement, University President Amy Gurtman called the account repugnant and said, "We are both angry and saddened that it was directed to our students or to anyone. The people responsible for this are reprehensible. We have increased campus safety."