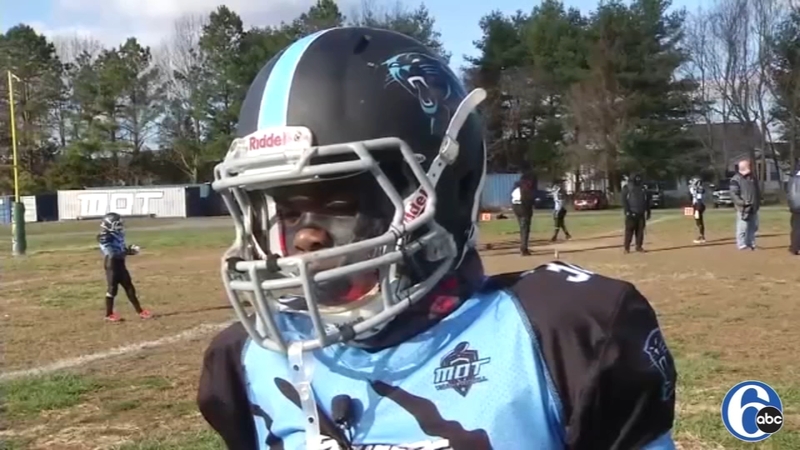 MIDDLETOWN, Delaware (WPVI) -- A doctor once told Isaiah Bingham's parents that their son would only be able to swim because of his eye condition.

"That was the first and last time we took him to that doctor," Isaiah's mother Dionne Bingham told Action News this weekend as her now 10-year-old son was taking the field - the football field - in Middletown, Delaware.

"Which is, basically, the part of the eye that allows you to see, there's field deficits, there's holes straight through," Dionne said.

He was declared legally blind, but despite the diagnosis, his parents didn't stop believing their son could accomplish whatever he set out to do. Neither did Isaiah.

"He's amazing at anything he put his mind to," Dionne said.

Last year, Isaiah won a championship playing basketball. But he wasn't done there.

He told his mom he next wanted to play football.

At first, his mother said she was "totally against him playing football." But, like always, Isaiah believed in himself and so did his parents so they signed him up.

Isaiah was a tad shy answering our questions, but opened up more when his mother took over the interview.

Dionne asked her son how it felt when he found out he could play football.

"I was happy," Isaiah responded to his mom.

She then asked Isaiah what he told the doctors who said it was not possible for him to play football.

"It was possible," Isaiah replied. "Because God lets me see things. I'm legally blind but I can see a little bit."

"He's been a Godsend. He's been a blessing since we got him," Crawford said.

Crawford said the boy jumped right in with everyone else. He said Isaiah hustles as much, if not more, than the rest of his teammates.

"He leads by example and they follow him," Crawford said.

Despite the boy's visual impairment, the team nicknamed Isaiah 'Vision,' not in reference to what he doesn't have but in reverence of the remarkable abilities he does have.

Isaiah plays nose guard and defensive end. His determination led him to recording several sacks and forced fumbles this season.

"I like playing defense because on defense you get to stop the other team from scoring a touchdown," Isaiah said.

Coach Crawford recalled one time they told Isaiah practice could only end early if he caught a pass.

"He caught that pass and the kids were like 'oh my God, he caught it!' Everybody ran up to him," Crawford said. "It's beautiful. It's been awesome coaching him."

His mother said Isaiah's view of himself are in direct correlation with how his parents see him. She said, "It's what you put in your children."