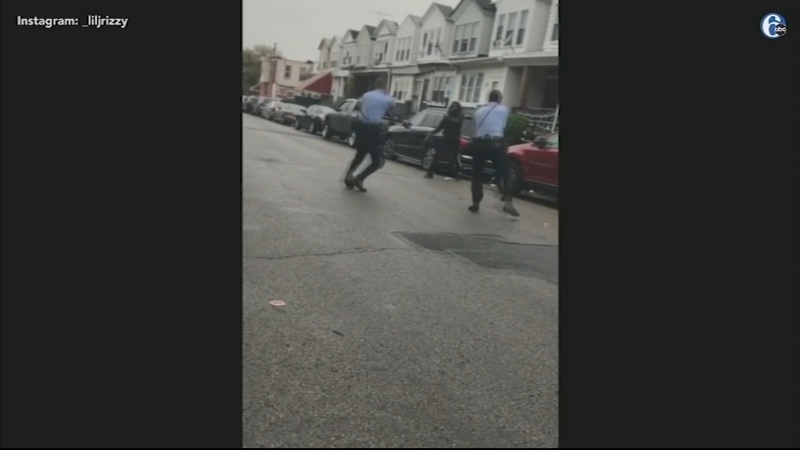 PHILADELPHIA (WPVI) -- The police bodycam video and 911 audio of a fatal encounter between Philadelphia officers and Walter Wallace Jr. will be released on Wednesday, Nov. 4, according to a statement by city officials and the Wallace family.

"The Wallace Family, the Mayor, District Attorney, and Police Commissioner have all agreed that releasing the body camera footage and 911 audio on Wednesday, November 4, by the close of business is in the best interest of our city and its residents. Philadelphians are experiencing an immense amount of pain, and significant unrest persists throughout the entire city. The collective hope of our local government and the Wallace family is that releasing the recordings on November 4 will provide enough time to calm tensions and for the recordings to be released in the most constructive manner possible."

Their attorney also claims the video shows Wallace was incapacitated after the first shot.

Attorney for Walter Wallace Jr.'s family held a press conference on October 29, 2020 after reviewing bodycam of the fatal police shooting.

Johnson said that the Wallace family is not calling for the police officers who fired the fatal shots to be charged with murder.

"And here's why, here's why: they were improperly trained and did not have the proper equipment by which to effectuate their job," Johnson said.

Outlaw has promised transparency and a full comprehensive investigation into the fatal shooting and the officers involved.

The district attorney's office will take into account what is on the video, how many times officers ordered Wallace, who was armed with a knife, to drop the weapon, and what officers knew about his mental health issues and criminal history when they responded.

The father of Walter Wallace Jr. says he wants justice in his son's death.

The department will also release 911 calls, which could shed light on what his family told dispatchers and how many times that day police were called to the West Philadelphia home. Wallace's mom maintains she called for an ambulance.

The video does not make it clear whether he was in fact holding a knife, but witnesses and the family attorney confirm he was.

"I understand he had a knife...and I think that does not give you carte blanche to execute a man," said Johnson.

Police officials said they could not confirm what information had been given to the responding officers, whether they were told about a possible mental illness or how many calls they had received for help at Wallace's address Monday.

Outlaw said earlier the officers involved in the shooting were taken off street duty as they investigate. She said the officers' names and other identifying information, including their race, would be withheld until the department could be sure releasing the information would not pose a threat to their safety.

Neither had a Taser or similar device at the time of the shooting, Outlaw said, noting the department had previously asked for funding to equip more officers with those devices.

The two officers each fired at least seven rounds - at least 14 total shots - but police could not say how many times Wallace was struck.

Johnson says the city has failed the Wallace family, the community and its police officers.

"The city has failed, not only the Wallace family, not only the other members of that community, who will be scarred and traumatized for the remainder of their days, but the city has also failed those police officers, it failed them tremendously. The only remedy the police had, in that moment per their thinking, was their service weapon. There was no less lethal action available. And that has been our war cry ever since Tuesday," said Johnson.

The Philadelphia police union supports the release of the bodycam footage calling the case cut and dry. Fraternal Order of Police Lodge 5 President John McNesby has not viewed it yet.

Wallace's killing spawned nights of unrest in the City of Philadelphia. Since Monday, there have been a total of 212 arrests.

Fifty-seven officers have been injured since the unrest. One officer remains hospitalized at this time.

While there were no was no curfew Thursday like the previous night, some streets in Center City were closed to traffic beginning at 9 p.m. They reopened early Friday morning.
Report a correction or typo
Related topics:
philadelphiapolice involved shootingwalter wallace jr shootingphiladelphia policebody cameras
Copyright © 2021 WPVI-TV. All Rights Reserved.
More Videos
From CNN Newsource affiliates
TOP STORIES