"This could be $2,000 sitting here," said Detective James Metzler, referring to the two stolen catalytic converters.
WPVI
By Katie Katro 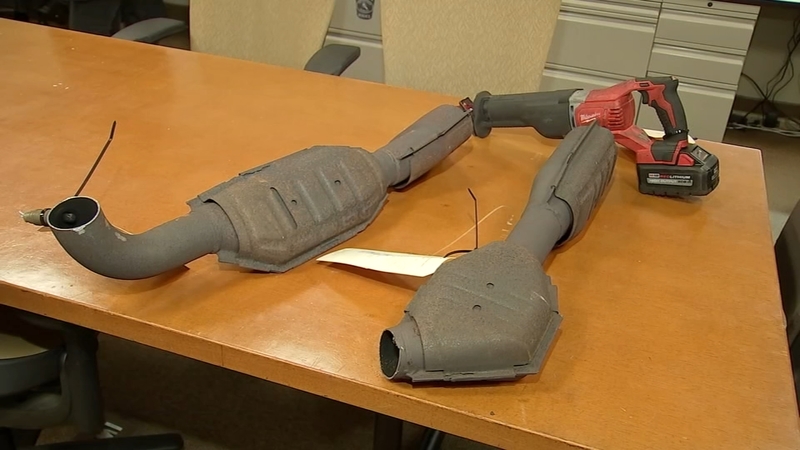 RADNOR TOWNSHIP, Pennsylvania (WPVI) -- Stolen catalytic converters can cost car owners thousands of dollars to replace. Police have made some arrests, but other thieves remain on the run.

Police said on December 19, around 4:30 a.m., a resident heard a sawing sound from the Radnor House apartment complex on East Lancaster Avenue, and called police. It's shocked some people who park there daily.

"Shocked, I mean I would never expect that around here," said Pat Crippen.

"Have the management association put up better lighting cameras and at least get a community watch started," said Paul Vici.

Thanks to the call, police were able to take two juveniles from Wilmington into custody. Police searched their vehicle and found two catalytic converters, several tools related to the crime, and over $2,000.

A catalytic converter sits between the engine and the muffler in your exhaust and it's worth a lot of money because of the precious metals it's made with, according to Radnor police, who say they're seeing an increase in these parts getting stolen.

"It can take a few seconds to a couple of minutes," said Metzler.

Metzler says he's seeing a rise in this crime of opportunity in the area because of how much these parts can be sold for.

"This could be $2,000 sitting here," said Metzler, referring to the two stolen catalytic converters.

In Warrington Township, police need the public's help to identify a person they think is responsible for multiple catalytic converter thefts in the overnight hours on December 20, on the 500 block of Easton Road.

Police said the suspect vehicle is believed to be a 2000-2006 Audi A4 with a 1.8-liter turbocharged engine. Police added the registration plate was either covered or removed from the back of the car during the crime.

"There has been a lot of them being stolen," said Dominic Guaglione, a manager at Rosemont Auto Service.

Auto body shops like Rosemont Auto have seen an increase of people coming in to get their converter replaced, and it isn't cheap.

"Probably between a thousand and two thousand depending on the car," said Guaglione.