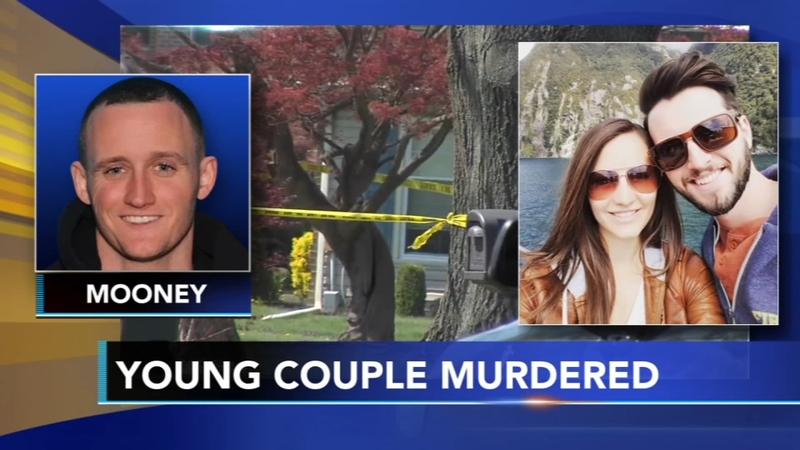 CHURCHVILLE, Pa. (WPVI) -- Authorities have identified the young husband and wife who were found dead inside their Bucks County home and are looking for a person of interest.

Police say the bodies of Tyler Roy, 27, and his wife Christina, 28, were found on the upper floors of their home on the unit block of Kitty Knight Drive in Churchville on Tuesday morning.

Autopsies will be conducted Thursday morning to establish the exact causes of death.

Twenty-six-year-old Daniel Kenneth Mooney has been identified as a person of interest in their deaths.

Police said Mooney, who may walk with a pronounced limp, once lived in the same neighborhood as the couple.

An active arrest warrant was issued for Mooney in connection to an unrelated car theft on April 30 in Northampton Township.

Mooney is wanted for questioning in the double homicide, as well as the theft of the Roys' vehicle.

The vehicle, which police say was stolen from the home that same night, was recovered Wednesday morning in Northeast Philadelphia.

Police said Mooney is considered dangerous, and anyone who sees him should not approach him.

Anyone with information on Mooney's whereabouts is asked to call 215-322-6114, or to click the "Submit a Tip" option at bucks.crimewatchpa.com. Tipsters can remain anonymous.

Authorities say the homicides were discovered around 10 a.m. Tuesday when a house painter who was working on the outside of the home found one of the bodies when he came inside.

The painter called 911, and responding officers located the second body.

Northampton Police Chief Michael Clark told reporters there was no sign of forced entry into the house.

Clark said the police had had no contact with the victims, who had purchased the home in 2016, the year they were married.

Asked whether Mooney knew the Roys, Bucks Co. First Asst. District Attorney Shore said, "We don't believe there was any prior relationship between them."